Why did the Government continue to insist on a softly-softly approach? 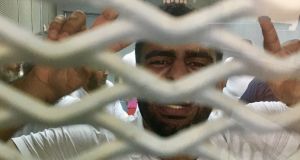 Ibrahim Halawa is an innocent man. His three sisters are innocent women. They were acquitted of all charges by an Egyptian court this week. It has taken four years and 28 trial postponements to confirm what he and his family have always asserted.

Four years is a long time and, as a 17-year-old about to embark on a college education, it must have seemed like a lifetime. Hearing about a big sister’s wedding, births of nieces and nephews, and friends’ graduations must have been extremely difficult.

Going from being a teenager who wanted to be on The X Factor to being a prisoner of conscience is a journey that no 17-year-old would want to make.

Over the past three 3½ years I have gotten to know Ibrahim’s five sisters, each one of them more formidable than the last. They were never going to give up on their baby brother and when the news broke on Monday, I can only imagine the relief and joy that they must have felt.

They have been catapulted from a normal, everyday life into one of campaigning and not once did they ever stop to think about themselves. They travelled the length of the country talking to local councillors and securing council motions.

They took their fight to Brussels and briefed MEPs, journalists and human rights NGOs. They were seated in the chamber of the European Parliament in Strasbourg when 566 MEPs passed a resolution calling for their brother’s release.

The fact that it has taken four years for Ibrahim to be released is shameful. He appeared nowhere in the book of evidence, yet he was forced to sit through a mass trial with 493 other defendants.

Under Egyptian law, a minor cannot be held in prison without conviction for more than two years. Ibrahim remained detained for twice that time.

Egyptian law, rule 140, allows for the Egyptian president, currently Abdel Fattah al-Sisi, to issue a decree allowing foreign prisoners accused of, or convicted of, a crime to be returned to the judicial process in their home country. Yet al-Sisi refused to do this in Ibrahim’s case despite having issued such a decree in the past for other prisoners.

So why has Ibrahim not been released until now?

When Ibrahim Halawa was arrested the Irish Government decided to take an approach of quiet diplomacy, and encouraged the family to do likewise. Whatever about the merits of this approach at the start, the refusal to deviate from it was astounding. This is not to criticise the work of the consular staff and senior officials within the Department of Foreign Affairs, who have worked extremely hard behind the scenes.

However, when the two years of arbitrary detention passed, why then did the Government not demand Ibrahim’s release under Egyptian law? Why did they continue to insist on a softly-softly approach and encourage the family to do likewise?

When Peter Greste, the Australian Al Jazeera journalist working in Cairo, was arrested days after Ibrahim, he shared a cell with the young man. After 13 months he was back in Australia, released under rule 140.

Those of us who campaigned for Ibrahim spoke with Greste’s lawyers and various others who campaigned on his behalf. The people we spoke to were adamant that the public stance taken by the Australian government was instrumental in his release. That public position was very much assisted, they believe, by a groundswell of public support.

Spurred on by this advice, Ibrahim’s sisters and campaigners set about ensuring that the public knew the truth about their brother. Over time, a broad-based campaign group developed. Petitions were started, protests were called and, little by little, Ibrahim Halawa became a public name.

If it were not for that very public campaign, there would have been no European Parliament resolution, the Dáil would not have passed a cross-party motion calling for his release, and a parliamentary delegation would never have gone out to Cairo to visit the young man.

It was that parliamentary delegation that secured a stronger commitment from al-Sisi to release Ibrahim after the trial concluded. It was the sheer determination of the Halawa campaigners that ensured the new Taoiseach, Leo Varadkar, would have no choice but to push for his release.

Most importantly, however, if it were not for that public campaign, Ibrahim Halawa may have given up years ago. He told those of us who met him in prison that he was lifted knowing that people cared about him in Ireland. Monday’s announcement of his innocence was a vindication of his families efforts and now we must ensure that there is no delay in his return home to Firhouse.