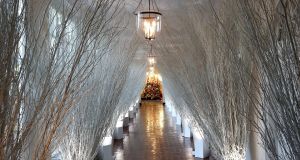 It’s beginning to look a lot like the war on Christmas - that traditional time of year when seasonal decorations and holiday greetings are magically transformed into divisive political statements.

It’s Donald Trump’s first Christmas as president. The season is a very special time of year for him so much so that all of 18 months ago - even before he had secured the Republican nomination - one of his first campaign promises was the promise that if elected president, “we are all going to be able to say ‘Merry Christmas’ again”.

Quite who was preventing anyone saying “Merry Christmas” was never elaborated on.

Last December, before he took office, he told us how he always advised his wife, Melania, not to buy anything in department stores where they use the non-denominational trigger words of “Happy Holidays” in place of “Merry Christmas” and he also called for a boycott of Starbucks coffee shops because of the secular design of their cups at Christmas.

Christmas came early for Trump this year. He got the holiday season trending on social media back in early July when he said in a speech to military veterans, “Our religious liberty is enshrined in the very first amendment in the Bill of Rights, so I remind you that we are going to start saying ‘Merry Christmas’ again this year”.

Whether it be spring, summer or autumn, Trump reflexively reaches for the “Let’s Make Christmas Great Again” theme in his speeches. He does so because of the “applause line” (positive listener engagement) data.

The analysis shows that every time Trump mentions “we can say ‘Merry Christmas’ again” or a variant thereof, he receives his biggest applause lines. Such is the reaction to his Christmas material that the only line in his repertoire that can touch it in terms of applause volume and duration is, “We’re going to build a wall and Mexico is going to pay for it”.

Christmas is his best line - and he’s going to use it regardless of context.

By conflating “Happy Holidays” with the “tyranny of the liberal agenda”, Trump is also bringing “political correctness gone mad” into the discourse. When he fuses the two in the same sentence, as he did in a speech in Washington DC in October - saying “They don’t use ‘Christmas’ because it’s not politically correct”, he didn’t just get good applause line, he got a standing ovation.

But there’s another reason why Trump is eager to position himself as the Man Who Saved Christmas.

In a paper for Political Studies Review, Orly Kayam looked at the readability and simplicity of Trump’s speeches. She found that for all of the Republican and Democratic candidates in the 2016 US election, a ninth-grade level of education (14-15 year olds) was required to understand what they were saying. But for Trump, only a fourth grade level of education (a nine year old) was required.

As Kayam writes: “Trump’s sentences and words were significantly shorter and less complex than those of any other candidate. This study suggests that Trump uses low readability and simplicity of language as a rhetorical strategy to gain popularity, in accordance with the trend of anti-intellectualism”.

Trump statements such as “Let’s ban all Muslims from entering the United States” bear this argument out.

His disproportionate amount of references to “taking Christmas back” are there to appeal to the inner nine-year-olds listening. And it’s working.

Operation #TrumpCup is a new activist campaign in the US whereby Trump/Make Christmas Great again supporters descend on a branch of Starbucks - the coffee company who have been accused of being “enemies of Christmas” for using non-denominational designs on their seasonal coffee cups.

This year’s Christmas Culture War is just beginning to heat up. The American Family Association (AFA) have just published their “Naughty or Nice” retailer list. As the AFA see it, “there are secular forces in our country that hate Christmas because the word is a reminder of Jesus Christ” so they busy themselves reviewing the websites, media advertising and in-store signage of retailers to see on which side of the Merry Christmas/Happy Holidays cultural divide they lie.

Trump is right about one thing - the spirit of Christmas has been lost in recent years. Who doesn’t miss those joyful Christmases of old when everything was just overly-commercialised, and not overly-politicised?