The message is clear: Stay where you are, and you get to remain nameless victims 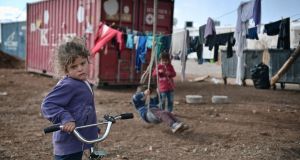 A child looks on at the Ritsona refugee camp, north of Athens – about 58,000 other people are trapped in limbo in Greece, where some families are expected to survive in unheated tents even as the freezing winter weather arrives. Photograph: Louisa Gouliamaki/AFP/Getty Images

Aleppo is in ruins, and across the political spectrum, there has been horror, outrage and anger. People share videos of dead children and wailing mothers, of neighbourhoods reduced to a fine white dust and doctors warning that those under their care may not survive till morning. Politicians cry that more must be done; ordinary people wonder how they can help.

But this recent outpouring of compassion for the victims of war now threatens to be extinguished by the actions of one man, a lone individual who drove a hulking black truck into revellers at a Christmas market in Berlin, killing 12 people and injuring 48 more. Once again there are politicians ready to exploit these facts for their own personal gain.

Already there are double standards in the way the European public and politicians view the citizens of Aleppo compared to the hundreds of thousands of others who have fled violence and persecution and have already arrived in Europe. They struggle to find the same compassion, and the message is clear: stay where you are, and you get to remain nameless victims, worthy of our tears and platitudes. But try and escape your dreadful situation and find peace in Europe, and all that awaits you is more suffering, anguish and suspicion.

British prime minister Theresa May earlier this month joined five other world leaders to condemn the “heartbreaking” images of dying children coming out of Aleppo. Around the same time, however, her government stopped relocating refugee children in France who are desperate to be reunited with relatives in England.

Federica Mogherini, the European Union’s top diplomat, was equally moved by the plight of Aleppo. “The important thing in these hours is really our constant work to make the situation better for civilians, especially the children,” she said last week.

Civilians already in Europe, however, can look forward to months of uncertainty after the European Commission said they may start returning asylum-seekers to Greece, where conditions have consistently been described by charities as inhumane and inadequate. Until now, returns to the asylum seeker’s country of arrival were suspended in the case of Greece because of the dire situation there.

One young single mother I know – a recognised refugee from Eritrea who lost her husband during their flight from persecution – is now hospitalised with severe depression after Swedish immigration authorities informed her that they were considering returning her to Greece. Her one-year-old child will spend Christmas with a social worker.

Compassion for refugees, it seems, evaporated in 2016. Instead, the European Union has created as many barriers as possible to keep those seeking sanctuary away from its shores.

On the Turkish border, guards have been documented firing in the direction of people attempting to cross, as they try to keep Syrians out to uphold a deal with the EU by which they get €6 billion if they can stop migrants leaving for Europe.

If a person does make it across to Turkey, they have just a tiny chance of taking part in the EU’s official relocation programme. Only 2,761 Syrians have been relocated from Turkey to the EU so far, a minuscule percentage of the 2.7 million Syrian refugees living there. Those who cross the Aegean join about 58,000 other people trapped in limbo in Greece, where some families are expected to survive in unheated tents even as the freezing winter weather arrives, the International Rescue Committee has warned.

Should a person try and take another route to Europe via lawless Libya, they face torture, forced labour and rape by both militia and security officials, the UN has said. If they finally set sail in an inflatable dinghy, they must pray they survive the trip. This year, more migrants will have died on the Mediterranean than any other in history. As of Monday, 4,899 people lost their lives at sea, already 1,000 more than last year.

But you rarely see their photos on the front pages of newspapers anymore, or politicians urging compassion for them.

There are many reasons why public opinion has shifted. It began on New Year’s Eve 2015 in Cologne, Germany, when refugees were blamed for sexual assaults. No refugees were eventually prosecuted, but the tone was set. Then there was a string of terror attacks in Belgium, France and Germany, most perpetrated by Europeans, but a handful carried out by refugees.

For the populist and xenophobic politicians, these are all convenient excuses to vilify new arrivals to boost their own popularity.

“They hate us and kill us and nobody protects us,” the Dutch anti-Islam politician Geert Wilders tweeted soon after the Berlin attack. But instead of challenging hateful rhetoric and putting any public fears into the context of the hundreds of thousands of law-abiding new arrivals, Europe’s mainstream politicians often simply shift their own policies towards the fringe, further emboldening the populists.

Even German chancellor Angela Merkel, a champion for welcoming refugees, has backed a proposal to ban full-face veils, a move widely seen as an attempt to regain ground from far-right forces ahead of elections.

Next year promises to be a difficult one for the EU. To the west, there is Donald Trump and his openly nationalist agenda. To the east, Russian president Vladimir Putin continues his antagonism towards liberal EU values.

Optimists in Brussels have spoken about seizing this opportunity to reclaim the EU’s place as a force for good on the global stage. The actions of one person in Berlin cannot threaten that vision. Without policies genuinely rooted in compassion and respect for human dignity, the EU risks losing its moral authority, and without that moral authority they will have little influence left in today’s tumultuous world.

Charlotte McDonald-Gibson is the author of Cast Away: Stories of Survival from Europe’s Refugee Crisis