We owe debt to Brazilian runner denied glory by Irishman

The moment Brazilian marathon runner Vanderlei de Lima was attacked by Irish priest Cornelius Horan at the 2004 Olympics while leading the race. Following the incident he fell back from first to third place, taking bronze. Video: Olympic Channel 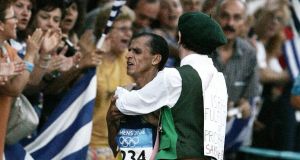 As the Brazilian marathon runner Vanderlei de Lima prepared to light the Olympic cauldron in Rio’s Maracanã stadium in the early hours of Saturday morning, my phone rang. My friend Vinicius is back in his native Rio on holidays and his message was terse: “I see your lot are causing trouble again.” There followed a picture message which showed de Lima being prevented from lighting the Olympic cauldron by Irish ex-priest Neil Horan.

This photoshopped picture proved a big hit among Cariocas (natives of Rio). It refers to an incident all Brazilians can talk emotionally about. At the Athens Olympics in 2004, Vanderlei de Lima was well on his way to winning Brazil’s first marathon gold. He held a 30-second lead at the 22-mile mark.

But then Horan jumped out of the crowd, grabbed de Lima and pushed him off the track. Horan said later he wanted to take out the race leader “to draw attention to the Bible”. Horan had been defrocked months earlier.

The Brazilian Track Federation launched an appealbut it was denied. At the closing ceremony of the 2004 Games, de Lima was awarded the very rare Pierre de Coubertin medal for the Spirit of Sportsmanship. Back home, he was voted athlete of 2004.

The Brazilian beach volleyball gold medallist from Athens, Emanuel Rego, took his medal and presented it to de Lima – the rightful winner of the Athens marathon. De Lima refused to take it, saying “my bronze medal means gold to me”. They still talk about Horan in Brazil. And they still regard de Lima as a hero.

When it became clear Pele would not be up to the task of lighting the Olympic cauldron last Friday night, the country’s second most-high achieving sports star, the triple Grand Slam-winning tennis player Gustavo Kuerten (Guga) was selected.

But Guga had another idea. The eyes of the world would be on the Brazilian sportsperson chosen to light the Olympic cauldron, and Guga thought, and the country concurred, only one man was deserving. Step up Vanderlei de Lima.

Brazil cried in pride when de Lima’s happy face appeared and the significance was not lost on the media. “Touching”, “Poignant”, “Beautifully judged”, “The right choice” were some of the phrases used.

In this country, we deserted Vanderlei de Lima. There was no Joe Duffy moment for de Lima, no Late Late Show appearance, no wine and cheese reception in the Mansion House. We were full of talk at the time. The Olympic Council of Ireland said he “may be invited to Dublin as a goodwill gesture”. We had “a view to honour him” at the 2004 Dublin City Marathon.

We nodded our heads when then Fine Gael spokesman on sport Jimmy Deenihan said de Lima “had shown great grace in dealing with such a distressing occurrence and I think it would be only right to honour his decorous conduct with a reception in Dublin”. The Olympic Council of Ireland noted “we feel we should do something for de Lima”.

His native country gave him his golden Olympic moment in the Maracanã on Friday night. Those empty promises we made came back to haunt us. We need to do something for this wonderful man.

1 Seán O’Brien: Anger over my parents’ break-up never left me
2 Sacha Baron Cohen: ‘I had to ring the alarm bell and say democracy is in peril’
3 Further anti-lockdown protest held in Dublin city centre
4 We need to reverse our thinking on lockdown
5 Covid-19: Taoiseach warns ‘bumpy roads ahead’ as 859 cases and four deaths reported
Real news has value SUBSCRIBE