Ireland is not safe from terror threat, EU Commissioner warns 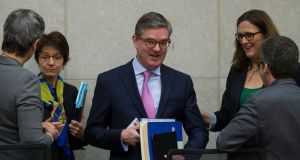 ‘We need to ratchet up the awareness’ of cyber-crime, says EU Commissioner for Security Union, Julian King. Photograph: Olivier Hoslet/EPA

Ireland is not immune to the growing threat of “low-cost” terrorism such as that seen in London, Nice and other major European cities in recent times, the EU Commissioner for Security Union, Julian King, has said.

Many of the recent attacks involved foreign fighters who had gone, or had attempted to travel, to fight with Isis in Syria and other conflict zones.

It was essential to share information on them across EU states, he said, and a shared database now featured 8,000 such suspects.

Asked whether the Irish Government allowing the US war effort to use Shannon Airport made the Republic a terror target, Mr King, a former British ambassador to Ireland, said terrorists wanted to target “our way of life” in Europe.

“So I don’t think anyone should relax and think they are going to be immune from that,” he said.

“Even if you feel you might be some distance away from this, I don’t think you can count on that.”

However, just because it was very difficult to detect when an emerging terrorist had radicalised, or was planning a knife attack or to drive a vehicle at a crowd, it did not mean the international community should be dissuaded, he said.

He did not believe the monitoring of those travelling to and from places such as Syria and Iraq was that difficult.

And travelling for the purposes of engaging in terrorism in a conflict zone would soon be a crime in all EU member states.

He did not believe Brexit and the simultaneous need to increase security checks at the EU’s external borders threatened the Common Travel Area between Ireland and Britain.

“It’s functioned for a long time and indeed predates the EU. No one questions how it works at the moment, so I don’t see why that should be a new problem after Brexit.”

The “security confidence which exists today” across Britain and Ireland was “very strong” and he could see no reason why Brexit would undermine that.

The “EU 27” and Britain were also both prioritising avoiding a return to a harder Border.

Mr King was in Dublin in recent days, where he addressed the Institute of International and European Affairs.

Asked whether even customs posts on the Border would become targets for dissident republicans, he said everyone involved in the Brexit negotiations would be mindful of that scenario.

Although traditional forms of organised crime and jihadist-inspired terror attacks were a pressing priority for the security agencies across Europe, he said, cyber-crime was growing most quickly.

“After all, if they can collect, analyse and see data about us for commercial and marketing purposes using algorithms, they can do the same thing free of charge to help on counter-terrorism.”

On the issue of cyber-crime in general, Mr King said it was now the most commonly reported crime type in the UK.

Internationally it had grown fourfold in the past two years and would do so again in the next two years.

“We need to ratchet up the awareness,” he said.

In relation to organised gangs dealing in drugs and firearms, Mr King said more work was required to create a harmonised regime across Europe to confiscate criminal assets.

“So there’s a much tighter network of co-operation between individual countries’ equivalents of the Criminal Assets Bureau. ”

The EU Commission had recently proposed a mutual recognition of assets confiscation orders in member states.

For example, because the leadership of the Kinahan crime gang has been based in mainly Spain for the past decade, its assets are currently beyond the reach of the Criminal Assets Bureau.

It can only seize assets in the Republic or assets abroad owned by criminals domiciled in Ireland.

In the Republic, Cab officers must convince the High Court that, on the balance of probability, assets being targeted represent the proceeds of crime. A target can be investigated even if they have no criminal convictions.

However, in Spain assets that represent the proceeds of drug dealing, for example, can be confiscated only if the person who owns or controls them has been convicted of drug dealing or a related offence.

And because the Spanish system is grounded in criminal prosecution and the Irish – and Italian – assets confiscations are civil actions, there is no reciprocity.

And while mutual recognition of confiscation orders has been proposed, it would work by introducing a new set of harmonised criteria for European assets confiscations rather than the process used in Ireland now.

Mr King said a report was being planned to explore whether the civil actions used by Ireland and some other EU states could somehow be included.