Cliff Taylor: In an uncertain world, economic forecasting is fraught with danger

Brexit is just one of the unknowns making growth predictions tricky 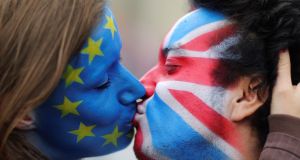 A hardish Brexit could knock one percentage point off our growth rate for a few years. Photograph: Reuters

When I started in financial journalism, it used to be a big enough story if one of the banks or broking houses came out with a forecast of economic growth rate that was half a point higher or lower than the consensus at the time. This may have been partly because we all gave too much credence to the power of economic forecasters back then, a faith shattered in recent years. But it also reflected the times – and we are talking the late 1980s and early 1990s, before the Celtic Tiger really started to take hold. Back then it really did seem to matter whether growth was going to be say, 3 per cent or 3.5 per cent.

Now, looking at next year and the years beyond, you can only have sympathy with the forecasters.

The Department of Finance put out its latest estimates this week, predicting strong growth this year and next, and a slowing thereafter. But while making a prediction for 2018 is reasonable, going beyond that is near impossible. And the margin of error is way above the half a point here or there which used to make the headlines.

Brexit is the main culprit, though not the only one, in a world where US president Donald Trump’s policies are unpredictable and we await the outcome of elections in France and Germany. The difference for Ireland between the best and worst outcomes in the Brexit talks is simply enormous – and when you add in the uncertainties of Trump’s trade and tax policies you can only pity those crunching the numbers. Even the most powerful economic forecasting software is, after all, only as good as the assumptions fed into it.

It is difficult to tie this all down in hard numbers, but the Economic and Social Research Institute estimates that a hardish Brexit could knock close to one percentage point off our growth rate for a few years. And if Britain crashes out after a big row with no agreement on what happens next, the damage could be even greater and would hit hardest on small and medium enterprises in some sectors and the rural part of the economy.

On the flip side, a smooth talks process and a free trade deal after Brexit would limit the costs to Ireland very significantly. The threat of tariffs that would inflict really serious damage on sectors such as food would disappear.

There would still be customs checks – unless Britain reverses course and stays in the customs union. But even the imposition of these might be delayed for a period of years under a transition deal that would effectively allow time for Brexit changes to be implemented. It is impossible to call how this will work out. In the immediate wake of the triggering of article 50, officially triggering the UK exit from the European Union, there appeared to be daggers drawn on both sides. In the interim, reports have emerged of quiet talking by officials on how a deal might work, and there have been some signals from British prime minister Theresa May which suggest that the penny about the risks they are facing is starting to drop.

The big food companies will be weighing up the risk to their UK exports, some of which could be hit with hefty tariffs

This presents significant planning difficulties for the public finances. Right now, GDP growth in 2018 is forecast to be 3.7 per cent – and just over 3 per cent in 2019. If, for example, these figures were to fall to 1.5 per cent for each year, it would transform exchequer numbers and budget options.

Businesses across the State are facing exactly the same problem. And the tricky thing is that it is different for just about every company. The big food companies will be weighing up the risk to their UK exports, some of which could be hit with hefty tariffs. Retailers will be concerned about the possibility of rising costs on products being imported due to tariff costs. All trading companies will be worried about customs delays.

There is a whole range of knotty problems for business supply chains. And then there are some companies – those in professional services, for example, or many parts of the tech sector, for which Brexit could have a limited or even positive impact.

But the point is the same as for the exchequer. The gap between the best and worst case scenarios for many of the companies involved is really significant. If you are in the food sector, for example, you could face tariffs of between 10 and 40 per cent selling to the UK, depending on the type of products you are selling. Or, if a free trade deal is done, you might face no tariffs at all. And you could spend the best part of the next two years planning for something which never happens – or at least is not as serious as initially feared.

If you are on a company board or in a senior management role, you really don’t have much choice. You really have to follow the advice of the likes of PwC, Enterprise Ireland and many others which could be roughly summed up as “hope for the best but prepare for the worst”.

This is not another Y2K, the so-called millennium bug which we were told could stop computers and threaten security, airlines, banking and just about everything on January 1st, 2000. In the event, it was all fine: nothing much happened at all. Whatever way Brexit goes, it won’t be like that. We will all face significant and potentially damaging uncertainties in the meantime.