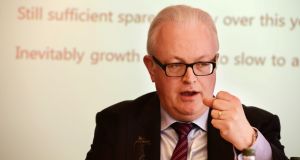 Irish small- and medium-sized enterprises are probably the most sensitive to the Brexit fallout, according to the Central Bank’s chief economist.

Speaking at a conference hosted with the European Investment Bank in the Central Bank’s new base in the Dublin docklands, Gabriel Fagan noted that almost a quarter of SME loans were non-performing as of last year, with loans out to the sector having slumped from €35 billion in 2010 to about €16 billion last year as firms concentrate more on repaying borrowings rather than taking on fresh debt.

About 73 per cent of SMEs are currently financing their operations and investment with internal funding and retained earnings.

The comments came as the European Investment Bank’s latest annual survey of firms’ funding, published on Monday, showed that Irish SMEs faced higher funding costs and greater collateral demands than most peers across the European Union.

It found that Ireland had a highly polarised market, having some of the highest levels of profitable firms in the EU able to fund investment internally but also having among the most constraints for companies seeking external funding.

The EIB survey of 12,500 firms, including 400 Irish companies, which started immediately after the UK referendum on EU membership last June, found that respondents in the State were the most concerned about Brexit having a negative impact, at over 40 per cent. Those surveyed in Luxembourg, by contrast, saw the greatest opportunities.