Stories about Pepsi, United Airlines and Sean Spicer ticked the “social media storm/online backlash” boxes but none of them stand up 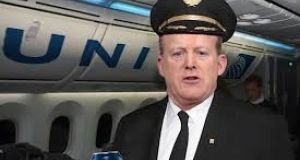 Sean Spicer dressed up as a United Airlines flight attendant holding a can of Pepsi. A hilarious photoshopped dénouement to a week of synthetic outrage. A social media feeding frenzy which began with Pepsi’s much criticised “woke” ad moved through the gears on hearing of the plight of an United Airlines passenger who was “involuntarily deboarded” from a flight and went into overdrive when White House press secretary Sean Spicer used the “N” word. N for Nazi.

Godwin’s law states that as any online discussion grows longer, the probability of a comparison involving Hitler (“reductio ad Hitlererum”) increases. Spicer’s clumsy attempt to put the actions of Syrian President, Bashar al-Assad into perspective by saying even Hitler didn’t gas his own people brought us climatically to Peak Outrage.

But even in the post-coital glow of offence taken and outrage expressed, we must know we were faking it. Superficially all three stories ticked the “social media storm/online backlash” boxes but none of them stand up. All have meretricious appeal for a system-supportive mindset but none are worthy of more than a shrug of the shoulders.

Soft drink company Pepsi have an ignoble history of ram-raiding youth appeal by signing large cheques for figures such as Michael Jackson, Madonna and Beyonce to shill their sugary syrup for them. Sensing a change in the cultural climate this time out, their newest ad appropriated various U.S. protest movements to position the drink as being down with banner-waving dissent (albeit a very polite and inclusive form of dissent).

Pepsi thought the ad made them look all counter-cultural and edgy but the internet buckled at the knees; Pepsi were being “disrespectful” to protest movements. The internet won - Pepsi pulled the ad within hours and apologised for “making light of a serious issue”.

I could be wrong here but if you’re actually offended by a daft ad by a crap cola company then maybe subverting the mechanism of social control that is the dominant ideology may be too much of an ask for you.

In the rush to criticise and condemn the Pepsi ad, the fatuous knee-jerk reaction obscured the bigger picture of Pepsi’s role in the civil rights movement. In “The Real Pepsi Challenge: The Inspirational Story of Breaking the Color Barrier in American Business”, author Stephanie Capparell details how while rivals Coke opposed “racial mixing” and saluted segregationist policies in the U.S. in 1940s and 1950s, Pepsi - in their employment of black executives and refusal to countenance Jim Crow laws - made a massive contribution to “America’s long march towards racial equality”.

It’s also worth noting that Pepsi were leaders in the boycott of apartheid South Africa during the 1980’s; rivals Coke were not. Pepsi’s long and vocal opposition to Apartheid was dutifully acknowledged by a just released from prison Nelson Mandela who on his first visit to the U.S. in 1990 demanded that the hotels he was staying in not serve Coke (“Apartheid is good business for Coke” said his aide) but Pepsi instead.

The bigger picture with passenger David Dao who was forcibly - if not brutally - removed from an United Airlines flight this week is that despite Dao loudly telling the packed airplane that he was a doctor and he couldn’t leave the flight as he had to get home to treat waiting patients at 8am the next morning, not one person on the flight offered to take his place.

Instead passengers whipped out their phones, shot a video of Dao being pulled off the flight and uploaded it to social media for a comforting round of offense/outrage. Were all the other passengers on that United flight doctors too who had to fly so they could treat patients? Was nobody civic minded enough to facilitate a doctor who needed to get to work?

Whatever about United Airlines being hauled over the coals, has no one asked all the many other passengers on the flight why their trip was more important than that of a working medical practitioner?

But then they had a difficult call to make: help somebody who genuinely needed help or record a video that would have their social media timeline buzzing.

This fatuous, almost fetishized desire to have a finger constantly pressing down on the offended/outraged button was evident again this week with numerous individuals and groupings calling for White House press secretary, Sean Spicer, to be sacked for saying that in relation to Syria’s use of chemical weapons, “even Hitler didn’t sink to using chemical weapons”.

Spicer - who, in Victor Lewis-Smith’s immortal phrase - is a few coupons short of a pop-up toaster - is currently on an “apology tour” to assuage the offended and outraged. Lost in the gloating over his misfortune is the very real and very pertinent point Spicer was attempting to articulate before invoking Godwin’s law - how long can Putin’s Russia prop up a regime that uses chemical warfare on its own people?

Instead of real news this week, we’ve been subject to internet memes, photoshopped jokes and tiresome quips by tiresome chat show hosts about the travails of Pepsi, United Airlines and Sean Spicer.

There was a time when the media provided balance, context and perspective; when it didn’t act as a homogenous Greek Chorus by reheating “social media storms” and failing to see beyond the top line of a story.

But who wants that when you can have a hilarious photoshopped picture of Sean Spicer dressed up as a United Airlines flight attendant holding a can of Pepsi instead?