If you want to see America’s political future, you need to look back 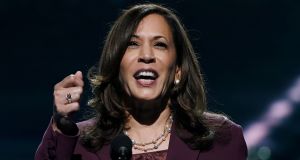 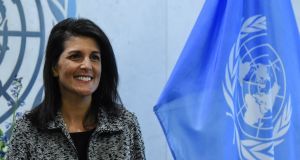 Nikki Haley, nominated as UN ambassador by Donald Trump, managed to leave his administration two years later still on good terms with him and with her reputation more or less intact. Photograph: Stephanie Keith/Reuters

Watching Nikki Haley address the Republican convention this week, I wondered whether she will end up squaring up to Kamala Harris as a presidential candidate in 2024. It’s not as mad as it sounds, that two American women of Indian descent could slug it out for the presidency.

The depressing thing is that while it should represent a momentous change for the US, it could, in fact, just be a rehash of some very old tropes.

Haley is the more experienced politician. She was a popular governor of South Carolina from 2011 to 2017, the first woman governor of that state and the first female Indian American governor in the US.

She came to national prominence at a time of tragedy in 2015. Dylann Roof (whom Haley refuses ever to name in public) went to a black church called Mother Emmanuel, was welcomed by them and pretended to pray with them. He then took out a gun and shot dead nine parishioners.

After the shooting, Haley called for the removal of the Confederate flag from state buildings, a brave call for any Southern politician

In her book, With All Due Respect, she describes how Clementa Pinckney, a much-loved Democratic senator and pastor who was her friend, was gunned down that evening. Perhaps the most moving part of the book is when she describes phoning him, unaware that he was in the building and probably already dead. After the shooting, she called for the removal of the Confederate flag from state buildings, a brave call for any Southern politician.

She was then nominated as UN ambassador by Donald Trump. Showing skill akin to diving from a 10-metre diving board and emerging from the pool bone dry, she managed to leave his administration two years later still on good terms with him and with her reputation more or less intact.

She is a canny woman. At the convention, she was careful not to alienate Trump supporters but the first person she referenced was Jeanne Fitzpatrick, UN ambassador in Reagan’s administration. While praising Trump, she reminded people of a time when it was possible for a Republican president to be both populist and popular across political divides.

The subtext might be that she would be president in the mould of Ronald Reagan, except the problem is that Reagan’s America is gone. When Reagan entered office, the top marginal tax rate was 70per cent. It is now 37 per cent. There are no easy tax cuts to make that put money in the pockets of the middle classes.

Anyway, Republicans are much more interested in cutting taxes for the rich.  Even after the Great Recession, while the blue-collar worker watched her wage packet shrink and the cost of retirement rise, the Republican Party remained obsessed with tax cuts for the wealthy and trying to kneecap Medicare (federal health insurance for older and vulnerable people). No wonder blue-collar workers voted for Trump.

While I think Haley is a sincere person, I also think she is fundamentally wrong on many issues. I admire her pro-life beliefs but despair that she is a foreign policy hawk. Her economic views fundamentally reinforce inequality.

Mind you, Kamala Harris, the first African American woman to serve as California attorney general and the first Indian American senator, is no major threat to capitalism, either. In mid-August, the Wall Street Journal reported that Harris met with approval by Wall Street. Far from being some kind of die-hard socialist, Wall Street power brokers view her as a welcome and “more moderate shift for the Democratic Party”.

Bill Daley, vice-chairman of public affairs for Wells Fargo, America’s largest mortgage lender, stated: “Is she a progressive? Yes. Is she someone who wants to burn the building down? No. I think she wants to strengthen the building.”

Nor is she (or Biden) any threat to Silicon Valley. Facebook’s Sheryl Sandberg and Salesforce.com Inc co-founder Marc Benioff are among her backers. While critical of social media on privacy issues, she has never suggested tackling the social media giants’ virtual market monopolies which allow them to crush competitors.

If Haley nods to Reagan, Harris is pure Clinton – both of them. Both Clintons exhibited what might be politely called ideological malleability, or less politely, finger-to-the-wind views. Part of the reason Kamala Harris had to bow out of a disastrous campaign to secure the Democratic nomination was that she changed her position on universal healthcare so often in quick succession. As a public prosecutor, she used technicalities to prevent DNA testing that might have freed innocent black prisoners and prosecuted mothers because their children weren’t attending school.

The key to her personality may have been revealed in a Stephen Colbert interview. He asked her how she could go from such passionate opposition to Joe Biden on key issues like racism to full support for him. She laughed and repeated in eight different ways: “It was a debate!” It would have been great if Colbert asked her whether by that she meant that any statement is justifiable in a debate. He did not.

The sad thing about both Haley and Harris is that while they may give the appearance of being fresh faces, scratch the surface and it’s same as it ever was. If you want a vision of America’s political future, look to its past.

1 Helen McEntee holds up well for someone with barely a leg to stand on
2 Anti-alcohol zeal of public health experts peppers reopening debate
3 Covid-19: Government set to reject advice and approve reopening of gastropubs and restaurants
4 Restaurants and gastropubs to reopen in December under Government plan
5 Admission of mistake in Oxford vaccine dose raises doubts over reliability
Real news has value SUBSCRIBE