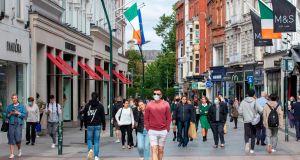 The Government’s job stimulus package lists initiatives directed at communities and at creating jobs, but does not elaborate on how they will be connected. Photograph: Getty Images

Two trends are colliding in global politics: pervasive economic insecurity and unemployment, especially among young people, and the parallel concentration of wealth, which has been enabled by policy. This collision produced the Arab Spring and sustained protests in that region over the past decade, but governments around the world may have to face similar tensions over the next several years because of recent and impending job losses.

The pandemic has made the effects of economic inequality more visible and has strained already frayed safety nets across countries, instigating rising demand for services that meet basic needs, like food banks, and government intervention to control or postpone rent payments.

The recent friction in the Dáil over a pay rise of 1 per cent or 2 per cent, the decline in PUP payments this month, and the threat of growing redundancies from the economic crisis provoked by Covid-19 as well as Brexit show that Irish policymakers will also have to confront not just the dilemma of creating jobs but also the thornier question of income distribution.

In fact the latest unemployment and enforced deprivation figures indicate not just the effect of the pandemic, but also the social consequences of the Irish economic model.

Beyond recent joblessness, CSO data on deprivation also points to longer-term trends concerning declining quality of life for the most economically marginalised groups in Irish society.

The recently-released 2019 CSO figures reveal increased inability – especially among households in rented accommodation, single parents and individuals not in work because of illness or disability – to adequately heat a home, much less go out to eat or buy furniture. According to the CSO data, the percentage of the population experiencing three or more types of deprivation items increased to 12.0 per cent in 2019 from 9.9 per cent in 2018. Next year’s figures, with the impact of Covid-19, will undoubtedly register another jump.

The two sets of figures combined evoke another crisis – mounting anxiety and depression. Further CSO research in April of this year indicated an overall decline in life satisfaction during lockdown and greater financial worries, especially among women and young people (18-34).

Another recent survey found greater anxiety and depression amongst younger and lower-income respondents as well as individuals reporting loss of income.

Faced with rising despair and frustration, and potential social tensions about current circumstances and longer-term life chances, policymakers now urgently need to consider how legislation can be implemented to create a fairer society.

Rather than relying on pre-pandemic strategies of generating macro-economic growth through tax policy and, more specifically, cash transfers to alleviate poverty and inequality, the Government should consider how to combine their support for domestic industry with greater economic security and social solidarity, already in place because of the pandemic.

Right now the Irish Government’s job stimulus package lists initiatives directed at communities and at creating jobs, but does not elaborate on how they will be connected. For example, programmes like Government support for community-owned initiatives in renewable energy are focused on the environmental impact more than the community itself.

Jobs have to be first and foremost about people, not just fixing infrastructural needs.

In fact Government policy towards relevant industries for climate action, which should continue to grow in importance, offers a possible platform for connecting jobs with a fairer society.

Government intervention into regulating the workforce in these industries would indicate a desire to avoid replicating the structure of other sectors, namely reliance on temporary contracts and downward pressure on income, and would stimulate the formation of a more confident and financially resilient workforce.

Beyond pay the Government could also facilitate worker ownership and the growth of social enterprises and co-operatives, as well as expanding the number of industries eligible for government-supported apprenticeships so that young people have the skills necessary to acquire good jobs in growing industries.

The Government should likewise assist these types of businesses to become competitive, for instance in bidding for government contracts and meeting standards for export.

The programme for government recognises the significance of assessing “societal wellbeing” as well as the state of the economy. Though this assessment will initially focus on health, education and housing, the Government should consider adding work. The wellbeing of a society, and now especially, depends as well on the kinds of jobs available, and in turn how economic policy influences the quality of work.

Including work in the initial wellbeing barometer would mean that the Government acknowledges its vital importance to society in the post-pandemic era.

It would also mean that adding jobs to the economy is not just about reducing national unemployment figures and government expenditure on benefits.

If we are to avoid falling into not just an employment but also a societal and intergenerational crisis, jobs have to enable individual aspirations and collective hope for the future, especially among young people and struggling families.

The business-as-usual approach, which depends on cash transfers to avoid poverty and low-wage work to soak up joblessness, not only seems too wishful, it just isn’t fair.

Shana Cohen is the director of Tasc, the Think Tank for Action on Social Change