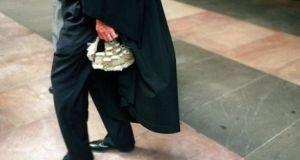 We are not told whether there will be any transparency around what happens once names are sent to the Minister for Justice. File photograph: Getty

This week, the heads of a new Bill dealing with judicial appointments were published. Rather than reviving the 2017 Judicial Appointments Commission Bill (known to many as the Shane Ross Bill), the Government will introduce fresh legislation. Given the controversy which surrounded the previous Bill, this seems wise.

While welcome, and offering a degree of hope for a better process, some aspects of the proposal disappoint, and much remains unknown.

The biggest difference in the new proposal relates to the most contentious aspect of the previous Bill: the requirement for a lay chairman or woman of the new appointments commission and a lay majority of members.

The new Bill proposes that five unranked names should be sent forward. This does little to limit the government’s ability to make party-political choices between candidates

While these devices are common in other jurisdictions, they attracted great opposition here. The new Bill proposes that the Chief Justice shall be chairman of the new commission and, rather than a lay majority, the body will have equal judicial and lay representation.

This is a welcome compromise. It is fitting that our most senior judge has a central role on the commission, and equal representation for the lay and legal members strikes an apt balance between knowledge of the legal world and important insight and diversity which lay members can bring.

It has been demonstrated in many jurisdictions that such representation on appointments bodies contributes to more diversity in judicial candidates, and thus a more representative judiciary.

The new proposal also slims down the commission from 17 members to nine. This is a welcome change, as the size of the previous commission seemed excessively large and potentially unwieldy.

One effect of this is that the heads of all the courts will not be included as standing members of the commission. But judges will still comprise almost half the body.

However, one questionable element of the new proposal is the continuing role of the attorney general in judicial appointments, albeit as a non-voting member of the commission. It is unclear why this is necessary; presumably, it is thought to provide some link to the executive in the process.

But since the executive retains total discretion to appoint any candidate it chooses, and the names of all candidates considered by the commission will be sent to the Government, this is hardly necessary. Questions will remain about whether the attorney general should be eligible for direct appointment to the bench, or if this should be allowed only some years after leaving office.

The new Bill’s most disappointing element, perhaps, is the lack of ranking in the commission’s recommendations. It has been recommended by many commentators that a new appointments body should recommend perhaps three names to the Government, ranked in order of quality.

This would give the Government a strong political reason to accept the commission’s recommendations, as it would have to politically justify departure from them, and thus reduce any scope for political-party preference or patronage to play a role in appointments. This has long been said to be the major problem with our system.

The new Bill proposes that five unranked names should be sent forward. This does little to limit the government’s ability to make party-political choices between five candidates. Since presumably this new body will conduct a more rigorous assessment process than its predecessor, why not avail of this more fully and have candidates ranked?

A major benefit of the new proposal (also included in the previous proposal) is that the commission will consider judicial candidates for promotion as well as non-judicial applicants. This will end the problematic parallel process for considering sitting judges that was illustrated by the recent controversy over the appointment of Mr Justice Seamus Woulfe.

An overdue reform is in respect of the appointments procedure itself. The Bill proposes to develop upgraded procedures and requirements for judicial office selection. A procedures committee will prepare and publish statements setting out selection procedures and (judicial) skills and attributes having regard to several criteria (including such matters as diversity).

While these reform proposals are welcome, there is still much we do not know. We have been told recommendations will be based on merit alone, but we have not been told what are the criteria for merit or how this will be established. We are not told if interviewing candidates will be required or merely allowed, and if other assessment procedures – such as role plays or mock trials, common in many other jurisdictions – will be used.

We do not know whether it will be possible to consider areas of expertise needed by a particular court, nor whether – as proposed in the previous Bill – the appointment of academics to the bench will be possible, or whether any of the qualification criteria for judges will be changed.

Finally, and most importantly, we are not told whether there will be any transparency around what happens once names are sent to the Minister. Will all five names to be sent to Cabinet? Will the criteria for selecting the nominee be provided? The Bill is likely to be silent on these matters, but given the recent questions over the process used by the Government to select Mr Justice Woulfe, this will be scrutinised closely.

This proposal, and the speed with which it has been brought forward, is welcome after recent controversies. But, as the previous failed reform attempt shows, the devil will be in the details, and we will have to await the full text of the Bill to know it fully.

Laura Cahillane is senior lecturer in law at University of Limerick and David Kenny is assistant professor of law, Trinity College Dublin

5 The future of Covid-19 in Ireland: Best-case, worst-case and even-worse-case scenarios