To the atheist Sartre: Thank you for this vivid incarnation of Jesus 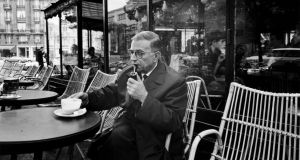 The French existentialist philosopher Jean-Paul Sartre, one of the most famous atheists of the 20th century, left his unbelief aside – at least temporarily – in December 1940. It was while he was a prisoner of war in a German camp, and it was all because of a Christmas play, the first play he ever wrote.

Drafted into the French army in September 1939, Sartre was captured by the Germans in June 1940 as his company retreated, and was imprisoned in the Stalag 12 D camp in Trier.

To keep himself intellectually stimulated, Sartre gave a series of lectures to fellow prisoners, most of whom were priests. He spoke to them about authenticity, freedom and hope. The priests were spellbound by his inspiring talks.

Paul Feller, a Jesuit seminarian at the time, was so moved that on being ordained after the end of the second World War, he dedicated the remainder of his life to living and working among the poor.

Sartre composed a play for these priests to perform on Christmas Eve 1940. Entitled Bariona, or The Sons of Thunder, it was a nativity play with a difference. Bariona, the chief of a poor village, takes a stand against the rising taxes from Rome by ordering that no more children are to be born in his village.

But when he hears of the birth of a messiah who will grow up to be a man of peace, he is incensed, because he wants a leader who will overthrow the Roman occupiers. Bariona sets out for Bethlehem to kill the baby. However, when he arrives at the stable he is captivated by the look on Joseph’s face and changes his plan altogether.

This is not the same nihilistic Sartre who published the novel Nausea in 1938, just two years beforehand. It is a different Sartre

Instead of killing Jesus, he goes to his own death, by gathering his men to fight a hopelessly lopsided battle against Herod’s soldiers who are intent on putting an end to the newborn child.

The most remarkable moment in the play is when Sartre tries to enter into Mary’s state of mind. He provides an astonishingly warm portrayal of her relationship with Jesus: “And no other woman has had God just for herself in that way. A very tiny God whom she can take in her arms and cover with kisses, a warm-bodied God who smiles and breathes, a God she can touch, a God who is alive. And if I were a painter, it is at a moment like this that I would paint Mary. I would try to capture the air of affectionate daring and delicate shyness with which she puts out her finger to touch the soft little skin of this baby God whose warm weight she feels on her lap and who smiles at her.”

This is not the same nihilistic Sartre who published the novel Nausea in 1938, just two years beforehand. It is a different Sartre, a man touched by the wonder of being, by the hope of new birth, and by the genuine affection of Mary: “She looks at him and thinks: ‘This God is my child, this divine flesh is my flesh. He is made of me, he has my eyes and the shape of his mouth is the shape of mine . . . He is my God and he looks like me!’”

These are the words of someone who has entered so imaginatively into the faith of the Christians imprisoned with him that it almost seems like he himself shares their faith.

I am grateful to Sartre, an unbeliever, for expressing the mystery of the incarnation of Jesus through the eyes of Mary

Sartre’s positive take on Christmas was so out of character that years later his companion Simone de Beauvoir claimed he had never written this play in the first place, as a result of which Sartre himself was forced to confirm that he was indeed the author.

He explained that the play did not signal any essential change in his atheistic stance but was a particularly fitting way to foster unity among the prisoners during that Christmas of 1940.

As a believer, I am grateful to Sartre, an unbeliever, for expressing the mystery of the incarnation of Jesus through the eyes of Mary, and in such a fresh and vivid way.

May we too experience something of the wonder and simplicity of the infant Christ, as we celebrate this Christmas.