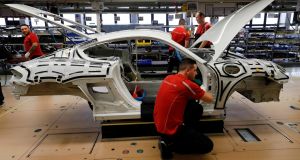 VW-owned Porsche assembly line in Stuttgart: German chancellor Angela Merkel has stuck by her pledge not to sell Ireland down the river to keep the British market open for Daimler, VW and BMW. photograph: ronald wittek/epa

The two had a lot to talk about and their the meeting, scheduled for 40 minutes, ran on for more than an hour. Yet those present say one issue didn’t even cross their lips: Brexit.

After the June 2016 vote, Merkel insisted on political carte blanche in looming talks and warned German industry not to harass her with special pleading over their UK business. Managers agreed and, three years on, that agreement has held.

Yet a competing narrative has stabilised itself during the same period in Brexit Britain: that Berlin will yield to its powerful car lobby to avoid a no-deal departure and, if necessary, Germany will sell the Irish down the river to keep the British market open for Daimler, VW and BMW.

Anything may happen between now and October 31st. But there have been no signs so far from Berlin – on or off the record – that the British narrative will come to pass.

It was the same before the Brexit referendum when David Cameron assumed – wrongly – that Berlin would do anything rather than let the United Kingdom go. Even if that meant curtailing fundamental EU freedoms of labour and movement to suit the needs of his eurosceptic backbenchers.

Merkel didn’t budge then and, while one can debate the rights and wrongs of her strategy towards the UK before the Brexit vote, she hasn’t budged since.

Ask around in German car industry circles and you hear the same response. Yes, they would rather not endanger their British sales but, by now, they have already priced in the potential loss of some British customers and have found alternative firms for UK supply chain components. For them, holding the rest of their EU market together is far more important than UK sales.

But even the EU market is not what it once was for them. British customers buy about a fifth of German cars actually made in Germany. Daimler, BMW and VW are more interested in their US and Chinese markets, where local plants supply deep-pocketed locals with their German product.

The idea that the German car industry would gang up on the chancellor to shore up a 20 per cent stake of their dwindling EU market is wishful thinking. That such thinking refuses to go away is an indication of British self-delusion. That such British self-delusion has penetrated many Irish minds – on Brexit and beyond – tells a story all its own.

Our shared language makes it almost impossible to escape the framing, messaging and spin emerging from our larger neighbour. Though loyal consumers of domestic media, many Irish also graze on British news throughout the day on their phones, leave Sky News running as they’re cooking dinner and tune into the BBC news and Newsnight before bed.

The internet and cable/satellite television have opened up Europe and the world to us, but when was the last time you tuned into France24 reports on Brexit, or dipped into talk shows on DW – Germany’s (largely English-language) equivalent of the BBC World Service?

Ireland’s history in the EU to date has been about liberating itself economically from its larger neighbour.

Instead, laziness and habit traps people on their sofas, inside a monolingual bubble, eating the Brexit crisps on offer from the UK.

It has been this way for centuries of close history, breeding what Prof Joe Lee described 30 years ago as a “dependence syndrome that had wormed its way into the Irish psyche during the long centuries of foreign dominance”.

“Reliance on the English model allowed a seductive economy of intellectual effort in Ireland,” he wrote.

He warned prophetically in 1989 that Ireland’s dependence syndrome towards the UK risks creating an inability to identify and define a problem “because it was unlikely to be perceived”.

This was never an issue given our parallel paths in the European Union – but now our paths are diverging. Our intellectual and cultural dependency on the UK has left many Irish minds unconsciously conditioned, more ready to believe British bluff on Berlin and its car industry over Merkel’s repeated promises of her “unconditional” support for Ireland in the Brexit process.

Ireland’s history in the EU to date has been about liberating itself economically from its larger neighbour. Brexit has expedited efforts to secure existing EU markets, identify new ones and secure trade routes to the European continent to shore up the economy.

But what is being done to shore up Irish minds? Where is the palpable boost in language teaching, the big spend on school and cultural exchange or even financing to rebroadcast, with subtitles, of other EU countries’ news? Done well, Brexit is a unique chance to connect with European culture and liberate Irish intellect from centuries of British cultural captivity. Done badly, or with the usual béal bocht approach, Brexit will push Ireland into a total eclipse of the mind.