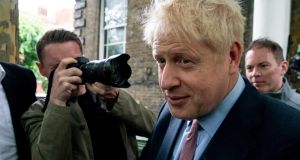 Boris Johnson is the clear favourite to win the parliamentary stage of the Conservative leadership election but his victory among the party’s membership is not a foregone conclusion. Photograph: Will Oliver/EPA

Outside Committee Room 14 after the first round of voting by Conservative MPs on Thursday, Boris Johnson’s team were candidly exultant. Within minutes, they were boasting that their whipping operation was so precise that they had given Johnson a note inside a sealed envelope before the vote predicting exactly the 114 votes he won.

At a Westminster drinks party a few hours later, however, Team Boris seemed anxious, apparently straining under the burden of their candidate’s runaway frontrunner status. They appeared to be especially stung by the charge that Johnson was hiding from public scrutiny by avoiding broadcast interviews and refusing to take part in televised debates.

By lunchtime on Friday, he was giving a lengthy interview on BBC Radio 4’s World at One, promising to take part in next Tuesday’s candidates’ debate on BBC television – but not Sunday’s on Channel 4. The reversal was less a moment of panic than an expression of the Johnson campaign’s “safety first” policy that has left little to chance.

Based in a corner office in Westminster’s Portcullis House, a team including former defence secretary and chief whip Gavin Williamson has targeted MPs systematically, feeding information into a detailed spreadsheet. Johnson’s team gathered data not only on MPs who were supporting them but on those backing other candidates and where their votes might go in subsequent rounds.

The sense of inevitability behind Johnson will encourage more MPs to climb aboard his bandwagon as other candidates fall away. Among those competing for the second place on the ballot for party members, foreign secretary Jeremy Hunt is in the lead, followed by environment secretary Michael Gove.

Gove’s campaign was almost derailed by last weekend’s controversy over his past cocaine use but as the most accomplished debater in the race, he has a chance to shine in the televised debates. Hunt’s campaign is sophisticated and well-resourced but his dry, technocratic style suffers in comparison with the glamour and excitement surrounding Johnson.

Home secretary Sajid Javid’s campaign had a slow start and his fifth place finish on Thursday with just 23 votes means he will struggle to overtake Hunt and Gove. International development secretary Rory Stewart has conducted the most energetic and daring campaign, making a passionate case for moderation and compromise. But he needs to increase his 19 votes to 33 to stay in the race after Tuesday and few of his colleagues at Westminster believe he can do it.

Johnson’s progress is all the more impressive in view of the fact that the parliamentary stage of the leadership election was expected to be the most difficult for him. He has always been a darling of the constituency associations but MPs have long been suspicious of him, not least because he is an unclubbable figure few of them know well.

Johnson is the clear favourite to win the contest but his victory among the membership is not a foregone conclusion. One home counties Conservative constituency association chairman told me this week that 90 per cent of his members were “ardent Brexiteers” but more than half were currently backing Stewart.

An Old Etonian former soldier and diplomat who served as a tutor to Princes William and Harry, Stewart situates his commitment to moderation within a British tradition of compromise that gave birth to the Anglican church and the Glorious Revolution. He will almost certainly be out of the contest within days but he may have shifted its centre of gravity so that Johnson’s policy proposals will be subjected to greater scrutiny.

Both Gove and Hunt are preparing to publish detailed policy proposals for the next stage of the election if they are among the final two. One campaign is also considering naming a ministerial team during the campaign in an effort to counterbalance Johnson’s star quality.

Whoever faces Johnson will be the underdog but 16 hustings before Conservative party members will put the frontrunner under an uncomfortable spotlight. What promises has he made to secure the support of the hardline Brexiteers in the European Research Group (ERG)? Can he accept a Brexit deal based on the current withdrawal agreement with changes to the political declaration? And why has he not ruled out suspending parliament to push through a no-deal Brexit against the will of the majority of MPs?

Dublin and Brussels will offer no concessions until it receives a demand from the new prime minister but they are watching the Conservative contest carefully. Optimists are hoping for a “Nixon in China” moment from Johnson, confident that he can alchemise a modest concession from Brussels into a major breakthrough in London.

According to this theory, Conservative MPs will be more forgiving towards their new leader than they have been to Theresa May and hardline Brexiteers will not wish to bring Johnson down over the details of the backstop.

If Johnson believes he is unable to win a meaningful concession from the European Union, however, he could be tempted into a snap election promising a no-deal Brexit at the end of October unless Brussels bends. It would be a high-risk move based on Johnson’s belief that he can win back Conservatives who backed Nigel Farage’s Brexit Party in last month’s European Parliament elections and capitalise on Labour’s divisions over Brexit and Jeremy Corbyn’s leadership.

If the gamble were to fail, it would put Corbyn into Downing Street and postpone Brexit indefinitely. If it were to succeed, the mercurial Johnson would command a majority at Westminster, free to pursue the Brexit of his choice with as yet unknowable consequences for Britain, Europe and Ireland.

1 Late Late Toy Show duet with musical hero ‘absolutely mad’ says delighted teen
2 Ireland’s teenage pariahs: ‘We are really at breaking point now’
3 Waterford turn Kilkenny upside down and inside out
4 Jim McGuinness: There is a way to save championship and make it competitive
5 Coronavirus: 243 more cases, seven further deaths reported in the State
Real news has value SUBSCRIBE