Taoiseach must regain initiative as he tackles Brexit, public pay, and end of Government 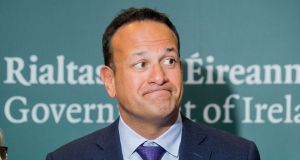 Taoiseach Leo Varadkar: he must contend with a stronger opponent as the clock ticks towards byelections that will mean the end of his flimsy Dáil majority. Photograph: Gareth Chaney/Collins

Three great and separate tests of statecraft, of good government and of politics await Leo Varadkar and his Government in the coming months. This is not as he or they would have chosen it; the administration has, as is admitted in moments of frankness by even those at its centre, more or less run its course, exhausted in purpose, policy and energy. Best to face such challenges with a mojo and a majority. But the timing of such matters in politics is often lousy.

The only thing that has prevented an election in the last 12 months is Brexit. And Brexit will, for the time being anyway, continue to prevent an election; and so the Government must struggle on for the coming months at least. And in that time the three great tests will arise. Events this week shed light on each of them.

The first great challenge, of statecraft, is Brexit itself. The result of the first round of voting in the Conservative party this week demonstrates beyond doubt that unless he self-immolates – not a conflagration beyond the bounds of either imagining or desirability, it has to be said – Boris Johnson will be the next Tory leader and so the UK’s next prime minister.

Leave aside for now what it says about the degradation of the Conservatives as an organisation of proper political purpose that it would consciously choose such a fundamentally unserious person as its leader, and consider rather what it means for Brexit and for Ireland.

The UK prime minister will be openly committed to leaving without a deal when the EU refuses – as it must – to renegotiate the withdrawal agreement. The British parliament will seek to block that – but that will be tricky. Even if parliament succeeds, it is hard to see it ratifying the agreement as it stands.

I expect Johnson will be utterly unconstrained by anything he has said or promised before, but expecting him to swallow the backstop – and persuade his party to drink up too – is wishful thinking masquerading as analysis.

As Jeffrey Donaldson reminded everyone in a lecture at the Institute of European Affairs on Thursday, the backstop is a problem not just for Conservatives but also for unionists. It is a major issue in British politics, and an orderly withdrawal of the UK from the EU may not be possible with it. We might not like that, but it might be true. And if it is, what then?

A version of this question has already been considered at the higher echelons of Government last year and early this year: do we risk the backstop bringing about the thing – a hard border –that it is designed to avoid?

Put another way, do we stick with the backstop no matter what the cost?

The choice then was Yes, we take that risk, we hold our nerve, because the UK will not crash out. It proved right: in the end Mrs May would not inflict a no-deal on her country.

But with Johnson the political context will change, perhaps drastically. Would he blink too? Probably. Would he definitely blink? Tough call.

The other thing to be said in passing about a Johnson premiership is that it is highly unlikely he will have the slightest interest in Northern Ireland.

So some very clear thinking, a fair bit of seeing around corners and rather a lot of very high stakes decision-making is going to be required in the autumn.

Varadkar’s second challenge, of good government, is more immediate as he prepares to meet public sector pay challenges (first up, the Defence Forces) and sets out the administration’s budgetary policy, coming in the Summer Economic Statement in a fortnight.

This week’s warnings from the Fiscal Advisory Council and from the Department of Finance’s chief economist John McCarthy – combined with Fiach Kelly’s revelations on Thursday about impending budget-busting in the health service – all add up to a pretty clear picture: there is an unanswerable case for a more prudent and cautious approach to the public finances.

Paschal Donohoe is a man under siege from spending pressures, to be sure. But in no walk of life is “they made me do it” an effective defence.

To practice good government Varadkar and Donohoe will have to – let’s be blunt here – say no to some spending demands by influential lobby groups.

They will have to do this because the wider public interest requires management of the public finances that ensures they don’t pop like a balloon at the first jab of an economic slowdown.

At the same time they must show progress in health and housing and public services, and all those measures demanded by voters. If that sounds simple it is one of the hardest things for any administration to achieve.

The third challenge is the political one of managing the end of this Government.

This time last year Fianna Fáil was wary of contesting an election against Varadkar: no longer. In the wake of the local election results, and having gleefully watched Varadkar’s ratings tumble, Micheál Martin and his party are increasingly bullish.

Much of his party were privately querulous of his Cunctator strategy of the past two years; Martin has been the delayer, who harassed his opponent rather risk a full confrontation before he was ready. But he is ready now.

On Friday, Harry McGee reported that Martin had told his front bench that general election tickets would be tweaked in the light of recent results. For many in Fianna Fáil the election can’t come soon enough.

So Varadkar must contend with a stronger opponent as the clock ticks towards byelections that will mean the end of his flimsy Dáil majority. His ability to manage his exit is diminishing.

Above all, Varadkar must regain the political initiative. Success in the first two challenges, Brexit and the public finances, could enable him to do that. Failure would surely doom him.