An Irishman’s Diary on the Rocks of Bawn 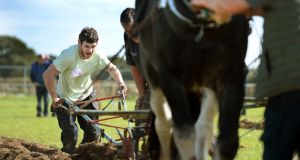 As with the Cliffs of Dooneen, the whereabouts of the Rocks of Bawn are one of the great debating points of Irish balladry. They most often get attributed to, and claimed by, Cavan. But this seems to rest mainly on the fact that Cavan has a place (two, even) called Bawn, and that being in the Drumlin belt, both would have a high rock content.

Whereas the place-name database logainm.ie records 10 other Bawns around Ireland, in counties Meath, Louth, Longford, Laois, Kildare, Westmeath, Leitrim, Mayo, Tipperary, and Cork. And okay, we could eliminate a few of those from the list of suspects for a place that was famously unploughable. Indeed, combining good soil and central location, some would be contenders to host the ploughing championships.

But of the others, the Leitrim Bawn – for example – would seem to have as good a claim as Cavan. And sure enough, in the Dúchas schools folklore collection from the 1930s, we find a student from that county transcribing the lyrics, as passed on by an uncle who had told her that Bawn was a “townland near Dromahair”, where the song had been sung for at least “100 years”.

Then there’s Connemara, which has no place called Bawn but more than compensates with rocks, and has also been associated with the ballad.

This is mainly because of Patrick Kelly, a Galway poet who published his own version in a 1922 collection.

The song had long predated him, however. And it was old enough by 1922 that its politics had fallen slightly out of fashion. Not that there is much political content in the lyric, which is mostly just a lament for the hardship of the agricultural labourer’s life.

But in the final verse, that narrator dreams of escape, via the softer option of war.

Here’s the Dromahair version: “I wish the King of England/Would write for me in time/And place me in some regiment/All in my youth and prime/To fight for Ireland’s glory/From the clear daylight till dawn/And I never would return again/To plough the rocks of Bawn.”

That first line sometimes referred to the “Queen” of England instead, no doubt reflecting the ballad’s popularity during the long reign of Queen Victoria. So either the uncle of the 1930s Leitrim schoolgirl had updated the words, or he was impressively accurate in quoting the version from 100 years before.

In any case, subsequent rewrites tended to replace the “King/Queen of England” with “the Sergeant-Major”, although at least one inserts “Patrick Sarsfield” instead. If that was in the original, it would plunge the song’s beginnings back to the 17th century. But like the geography, the chronology of Irish ballads is not always exact.

By the way, in case anybody feels the need to educate me, I know that the Cliffs of Dooneen are in north Kerry.

It’s just that they supposedly offer a view of the “high rocky mountains” of West Clare, which are otherwise invisible. That suggests the location is more a state of mind, which could be the case with the Rocks of Bawn too.

The hardship of Irish peasant life was sufficiently widespread that the song was assured sympathetic audiences almost wherever it went.

But if any man were qualified to adjudicate on which named Bawn could best claim it, it was Tom Munnelly, the much-travelled folk song collector who died in 2007.

For what it’s worth, he favoured the one near Granard, Co Longford.

Anyway, while delving in The Irish Times archive for mentions of the ballad, I found an account from 1905 on the sad demise, as the writer saw it then, of “the Irish street singer”. Recalling their heyday, he noted that they usually came with stage names referencing their place of origin: the “Mayo Star”, the “Galway Rake”, the “Roscommon Warbler”, etc.

But one was known as “Garibaldi”, which was doubly odd because she was a woman.

She had two specialties: “The Rocks of Bawn” and “Poor Old Grannuaile”: the latter being typical of the more political ballad of its time, apparently – and despite its title – by eulogising Daniel O’Connell.

O’Connell was the all-conquering hero of 19th-century street singers, according to the writer. No earlier patriots counted, with one exception.

A popular song also recorded the glories of the Wild Geese regiments: “When with brave Sarsfield at their head/They gained the day at Fontenoy”. The Battle of Fontenoy (1745) had indeed been a great Franco-Irish victory, although as the IT noted, there was a slight problem with Sarsfield’s involvement, he having died 52 years previously.

1 Covid-19: Hairdressers, gyms and religious services could return next week
2 Bloomberg ranks New Zealand top in fight against Covid-19 - but how did Ireland fare?
3 How to gift your child a house deposit . . . tax free
4 Q&A: When will we know more about plans to exit Level 5?
5 Alison Curtis: My guilt at not going for a second pregnancy
Real news has value SUBSCRIBE