Heritage sites, public buildings, window-sills and embassies across the world are lit up

Residents of Portobello, Dublin gather in their community for Shine Your Light, an initiative to show solidarity with Covid-19 victims and frontline workers. Video: Conor Horgan 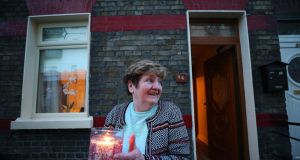 Lily Kilkenny during the Shine Your Light event, event was for people to show their support and solidarity with those who are sick and those who have lost loved ones to Covid-19. Photograph Nick Bradshaw / The Irish Times

Heritage sites, public buildings, people’s window-sills and embassies from the United States to Africa were lit up on Saturday in a show of solidarity with healthcare and other frontline workers.

Neighbours holding candles spilled onto streets and balconies across the island at 9pm in response to the #ShineYourLight call, which was also held in memory of the 427 people who have so far died of the Covid-19 illness, in the Republic and Northern Ireland.

The twitter account of President Michael D Higgins tweeted a photograph of Mr Higgins and his wife Sabina standing outside Aras an Uachtarain in front of dozens of lanterns: “President and Sabina Higgins joined the ‘Shine Your Light’ / ‘Lanraigh Do Sholas’ campaign, lighting lanterns as a symbol of hope and solidarity”

In a tweet earlier the Department of Foreign Affairs said embassies and mission across the globe would participate, and pictures of candles in the windows of Irish embassies in Helsinki, Norway; Bratislava, Slovakia, Nairobi, Kenya; Vilnius, Lithuania, Budapest, Hungary and Prague, Czech Republic followed.

The Irish mission to the United Nations in New York showed its support, tweeting: “In Ireland, lit candles in the window are a sign of solidarity & welcome. Candle. Across the world today, Irish have placed candles at their windows to show global solidarity, to remember those who have lost their lives to #COVID & to thank frontline staff.”

President and Sabina Higgins joined the 'Shine Your Light' / 'Lanraigh Do Sholas' campaign, lighting lanterns as a symbol of hope and solidarity.https://t.co/PeqaS8DbqI #ShineYourLight pic.twitter.com/jdKChYe5CD

We’re inviting everyone to #ShineYourLight for our healthcare and essential workers at 9pm tonight. For the sick, the grieving, and everyone affected by #Covid19. Our public buildings, embassies and peacekeeping missions around the world are joining in. I hope you do too. pic.twitter.com/LEMllxC1He

Stick your cameras, torches, LEDs, bike lights etc out windows & doors to join the show. We have lit up East Pier, Leadmines & LexIcon too#StaySafeStayAtHome cos we are beaming the light to the skies and you'll see it from afar! pic.twitter.com/ZSlX37NOFz

The IAA and ESB have lit the Beacon of Light from Ireland's tallest building as part of the @rte #ShineYourLight #LonraighdoSholas campaign. The light will continue to shine nightly at 9pm while the #COVID19 crisis continues, acting as a symbol of hope for the country #Hope pic.twitter.com/cBXbvuoclA

In the Middle East the Irish-Polish battalion of Unifil tweeted: “@irishpolbatt If we can winter this one out, we can summer anywhere. Thank you to all on the front line at home from all of us on the Blue Line in SOUTH LEBANON. We are so proud of you. #ShineYourLight @rte @irishmissionun @defenceforces”.

The Office of Public Works lit up heritage sites including the Phoenix Column in the Phoenix Park, Leinster House, Trim Castle and the Marino Casino.

Dublin Airport lit up one of its control towers, while at Shannon airport the main runway was fully-lit for the occasion. In Dublin the Poolbeg Incinerator, Arnotts department store and the Hugh Lane Gallery were bathed in the blue light of the emergency services. Dun Laoghaire Rathdown Council lit up the County Hall, the Leadmines, the LexIcon library and the East Pier.

RTÉ aired a five-minute special, Shine Your Light, before the Nine O’Clock News, showing images of people across the country holding candles and lanterns. Sinead O’Connor, dressed all in white, performed the 2003 Snow Patrol hit, Run, which includes the lines: “Light up, light up/ As if you have a choice/ Even if you cannot hear my voice/I’ll be right beside you dear”.

Taoiseach Leo Vardkar tweeted on Saturday: “We’re inviting everyone to #ShineYourLight for our healthcare and essential workers at 9pm tonight. For the sick, the grieving, and everyone affected by #Covid19. Our public buildings, embassies and peacekeeping missions around the world are joining in. I hope you do too.”

Minister for Health Simon Harris tweeted: “Tonight as we shine a light I want to say thank you to all the incredible people at the frontline in our hospitals and communities”. He thanksed those in the Department of Health, HSE and the “brilliant” Chief Medical Officer Dr Tony Holohan. “I want to thank the Irish people - your efforts are saving lives. Together, we will prevail”