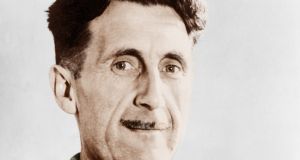 George Orwell: his novel 1984, published 70 years ago today, contains what has been dubbed “one of the strangest coincidences in literature”. Photograph: Getty Images

Published 70 years ago today, George Orwell’s 1984 contains what has been dubbed “one of the strangest coincidences in literature”.

This is because the novel’s villain is a man called “O’Brien” – we never learn his first name – a state agent who befriends the hero, posing as a fellow dissident, before having him arrested for thought-crime.

But a decade before the book was written, “O’Brien” had also been the codename of a London-based communist who was working for the NKVD (the Soviet police, secret and otherwise). And it was to this O’Brien that an agent in Barcelona sent reports on his surveillance of a British volunteer then fighting for the republicans in the Spanish Civil War, one George Orwell.

By the time his dystopian novel appeared, Orwell’s own future was bleak

Orwell may have suspected he was being spied on by his “own” side. In Homage to Catalonia, which detailed the treacherous divisions among republicans in Spain, he wrote: “You had all the while a hateful feeling that someone hitherto your friend might be denouncing you to the secret police”.

But according to Gordon Bowker, whose 2003 biography of Orwell revealed the coincidence, he cannot have known that another shadowy O’Brien was following his movements back in England.

The usual explanation for Orwell giving his 1984 protagonist a conspicuously Irish surname was the period he had spent working in the wartime Ministry of Information under the extraordinary Brendan Bracken. Born in Templemore, Co Tipperary, the son of a Fenian and founding GAA member, Bracken somehow reinvented himself in adulthood as a British conservative MP and friend of Churchill before becoming the minister responsible for propaganda during the war.

Orwell’s hatred of him is also suspected of being an influence on the fact that the supreme tyrant of 1984 – although it’s never clear whether “Big Brother” is a real person or just a figurehead – has the same initials.

By the time his dystopian novel appeared, Orwell’s own future was bleak.

His losing battle with TB had only months to go, as reflected in the discontinuance of his regular diary-keeping after 1948. What few entries there are subsequent to that, however, are typically telling.

In April 1949, for example, after a long stay in Scotland where he had grown used to the accents, he found himself in a Gloucestershire sanitorium listening to “upper-class English voices” again, appalled.

Bear in mind that Orwell was himself of genteel – if poor – birth, and that he had gone to Eton, albeit on scholarship.

But in the sanitorium, it was as if he was “hearing these voices for the first time
[. . . ] And what voices!”

If the following description of the speakers reminds you of at least one leading candidate for the Tory leadership, well, then I’m not alone:

“A sort of over-fedness, a fatuous self-confidence, a constant bah-bahing of laughter about nothing, above all a sort of heaviness and richness combined with a fundamental ill-will – people who, one instinctively feels, without even being able to see them, are the enemies of everything intelligent or sensitive or beautiful. No wonder everyone hates us so.”

As for the political pessimism from which 1984 emerged, Orwell had explained some of that in a 1947 essay, which also retains a lot of contemporary resonance, even in its title – “Towards European Unity”.

Among other things, it includes a blueprint for his coming novel, via one of three apocalyptic scenarios he thought faced the postwar world, all of which now seem unduly gloomy.

But he did foresee one possible escape route, whereby a sufficiently large area of the planet could establish a working model of “democratic socialism”, or as he put it, “the spectacle of a community where people are relatively free and happy and where the main motive in life is not the pursuit of money or power”.

The only place this could happen on sufficient scale, he thought, was “western Europe”. But as he warned – this was written when Donald Trump was a new-born baby – “there is always the danger that the United States will break up any European coalition by drawing Britain out of it”.

Russia would oppose it too, of course, although here also, he was prescient: “. . . for all we know the tendency of one generation to reject the ideas of the last is an abiding human characteristic which even the NKVD will be unable to eradicate”.

That note of optimism did not last until the end of the essay.

“But this is all speculation,” Orwell concluded, writing as he was in the year he began work on 1984: “The actual outlook, so far as I can calculate the probabilities, is very dark, and any serious thought should start out from that.”