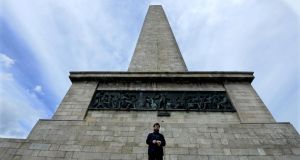 As someone who must have walked, run, or cycled every navigable inch of the Phoenix Park over the years, I’d be nervous of the OPW’s plans to “enhance” its open spaces, especially if that means more carparks.

But I’m all for them reinventing the old Magazine Fort as a visitor attraction. And while they’re at it, I’d love to see the fort’s near neighbour, the Wellington Monument, made more accessible too – all the way up, if possible.

I envisage the addition of a viewing platform near the top, with glass lifts ascending and descending simultaneously, illuminated at night. Maybe there could be a (well-protected) stairway too, for the fitter or claustrophobic.

Would this constitute abuse of a historic monument? Not if it was well done. With graceful lines, the viewing platform could become an improvement on the unadorned original.

And if we didn’t want the lifts to be visual statements in themselves, they could always be contained discreetly on the northern and western sides of the column, leaving the city-side faces unchanged.

It would be evolution of the monument rather than desecration. After all, as permanent as it appears now, the existing structure was the usual compromise between what was planned and what proved possible.

Had the NIMBYs of Merrion Square not had their way in 1817, it would have gone up there – a much more prominent location – instead of where it is, exiled from the city centre.

The design was also supposed to include a giant sculpture of the duke on horseback at the base, until money ran out.

For similar reasons, it should have been the “Wellington Testimonial” rather than “Monument”, since the honouree was still alive when they started building, although he had died of old age well before they finished.

The man himself would hardly have cared what subsequent generations did to it. As it happens, his memorial has already fared well in avoiding the 20th-century war on imperialist statues that swept away Nelson’s Pillar and many others.

But the duke remains unloved in the country of his birth, as the lack of celebration surrounding his recent 250th birthday shows. It seems unlikely that the gulf between his “overgrown milestone” (as critics have called the monument) and any popular affection for him will ever narrow now.

Even in England, where he was more at home, he lived to be out of sympathy with the democratic age ushered in by Catholic Emancipation (which he supported) and the 1832 Reform Bill (which he opposed).

He was already known as the “Iron Duke” by then, for his unbending nature. But when he had to fit iron shutters to the windows of his London home to prevent them being smashed repeatedly by rioters, it ensured the nickname stuck.

The Phoenix Park monument is a bit like the man: dour and forbidding. It has often been described as a phallic symbol and that too may be apt, since Wellington had very vigorous sexual appetites.

James Joyce saw the obelisk in those terms. In Finnegans Wake, he imagines the sleeping giant of Finn MacCool stretched out under Dublin, with his head at Howth, his feet at Castleknock, and the Wellington Monument playing a key part in between.

But visual presence aside, the monument is currently just as useless as another, more recent Dublin landmark: the spire. We seem to have a national penchant for building extravagantly tall structures that can only be looked at, despite the popularity everywhere else of towers people can climb.

The spire’s maligned predecessor was famously popular with tourists who paid to ascend its steps and enjoy the views from the top. And even Wellington monuments elsewhere have been known to bow to this convention.

The one in Somerset – also an obelisk, but shorter than Dublin’s and, in dubious taste, shaped like a bayonet – has an interior staircase, although it’s in poor repair and long closed.

A more democratised Wellington Monument would fit with the OPW’s plan for the park of turning the city-side corner into a “welcome” sector.

It would become a magnet for selfie-takers in particular, easing the pressure on Molly Malone’s statue.

But even if space on the viewing platform was limited, there might be room for an educational function too. A few well-designed exhibits could detail the Duke of Wellington’s life and explain Ireland’s complex relationship with him.

If nothing else, they would impress upon visitors one message in particular: that, for all his faults, the duke never did say that thing about how being born in a stable does not necessarily make you a horse.