Apple Turnover – Frank McNally on the temptations of Forbidden Fruit 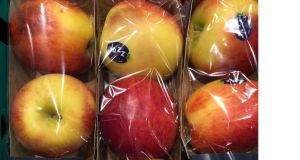 The variety in question was the well-named “Jazz”, a relatively modern one, from the 1980s

Among the delights in my local SuperValu of late are something labelled “Seasonal Apples”. I was at first pleased to see this, if also surprised, since June seems a bit early for apple-picking in Ireland. But I assumed it was another result of climate change, and that the fruit had travelled up to Dublin from somewhere semi-tropical, like Wexford.

Then I checked the small print and discovered the apples were from “New Zealand”. That explained the seasonal bit. Only the questions of how they had journeyed 10,000 miles, why, and whether we had any right to be eating them, remained.

The variety in question was the well-named “Jazz”, a relatively modern one, from the 1980s. As with the music form, the old rules no longer apply to fruit production. Anything goes and apples are never out of season anywhere. In the circumstances, I could only accept the logic of another claim on the packaging – that they were a “limited edition” – although what an unlimited edition of apples could mean escaped me.

The trip to the supermarket set me re-reading Green Fields, the 1938 journal of Irish country life by farmer-poet Stephen Rynne. I remembered it had a lengthy subplot on apple varieties, of which his Kildare orchard had a bewildering number. Even more than the rest of the book, this section now reads like a dispatch from a lost world, as he contrasts the qualities and defects of “Golden Spires”, “Kerry Pippins”, “James Grieves”, “Irish Peaches”, “Emperor Alexanders”, and many more.

Few were without virtue, but Rynne’s nonpareil among apples was the Cox’s Orange Pippin. The farmer in him admitted it wasn’t the greatest cropper – an important drawback. On taste grounds, however, it was sublime.

“Eat a Cox and die, having seen Naples and heard Beethoven’s Fifth Symphony,” he rhapsodised, “but don’t cultivate this apple on a large scale, or at least don’t do so with your hopes high, even though it is certain that Coxes grew in the Garden of Hesperides…”

This last detail would be disputed by apple historians, who insist that the Cox’s Pippin dates from 1830, not Greek mythology. But perhaps the Hesperides sisters – also known as the “nymphs of evening” – knew differently.

Their garden was most famous for its Golden Apples, and one in particular: the “Apple of Discord”. Now there was a limited edition. You may recall it was plucked maliciously by the goddess of strife who, after not being invited to the wedding of Thetis and Peleus, gate-crashed the event anyway, and offered the fruit as a prize “for the most beautiful” goddess. Chaos – and the Siege of Troy – ensued. But getting back to the mythical garden, there is a theory that its “golden apples” may really have been oranges, a fruit not grown in Europe then. So who knows, perhaps Rynne was right about the orange pippins in there too.

The Supervalu is three minutes’ walk from where I live. For most of the year, this is a simple journey. But on the first weekend of June now, it becomes complicated by the fact that we live beside the main entrance of a thing called the Forbidden Fruit music festival. So a bit like the residents of Garvaghy Road on the Twelfth of July, our cul-de-sac had to be barricaded in as usual last weekend for security. Indeed, thanks to fake tan, many Forbidden Fruit attenders do have something in common with the Orange Order (although in fairness, many of them look less like Orangemen and more like the Nymphs of Evening.)

The advance alcohol-smuggling checks start near the supermarket. So on the way back from shopping trips, I also have to run their gauntlet, or walk it, preparing to be searched. For some strange reason, they usually nod me through. Maybe it is to do with me being middle aged and having a bagful of catfood and cornflakes. I don’t know.

Getting into our road is relatively straightforward, at least for me. For my teenage sons, it’s more complicated. Their cover story – “we live here” – never sounds convincing. So even more than usual, to avoid the stress, they prefer to stay indoors all weekend and play video games.

There are rumours every year that, because of the inconvenience, we’re all entitled to free festival tickets.  Some residents aren’t interested. Others are and do get them, eventually. But I find the process slightly beneath what remains of my dignity. So as usual, I experienced Forbidden Fruit from the wrong side of a 14-foot wall. Just for the record, I didn’t get the New Zealand apples free either.