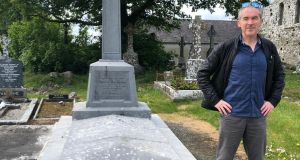 The month of June 1904 has been monopolised in Irish memory by James Joyce, whose first date with Nora Barnacle – on the 16th – later became the setting for Ulysses.

But within a few days of that rendezvous, there was at least one other notable meeting, also involving a great writer, that should be more famous in Ireland now than it is. It happened in Russia, on June 22nd, 1904, and brought Leo Tolstoy face to face with the founder of the Irish Land League, Michael Davitt.

Davitt was of sufficient international standing then to merit being entertained by the author of War and Peace.

He was not so well known, however, that Tolstoy didn’t make the faux pas of mistaking him for an Englishman.

“Oh no,” Davitt corrected, “I am Irish, not English in any sense.” And as he went on to educate the Russian on the subject, he later wrote, Tolstoy’s eyes “began to express a knowledge of why an Irishman should resent being taken for an Englishman”.

As Davitt biographer Laurence Marley writes, the visitor had clearly read Tolstoy’s then recent book, Resurrection, which dealt with the treatment of political prisoners in Siberia.

A veteran detainee himself, Davitt took up the theme, surprising his host with accounts of Britain’s harsh treatment of prisoners.

Then he ended their meeting with an appeal. “You have the ear of the reading world as possibly no living layman has today,” he told Tolstoy. “Say a word for Ireland’s right to rule herself when you can.”

It may come as a surprise to many, even those of us who studied him at school, that Davitt was still alive in 1904.

History books tend to concentrate of his role during the Land War. But as Justin Sammon of the Davitt Museum in Straide, Co Mayo, pointed out recently when I made an overdue visit, “that was just three years of his life”.

He went on to be an MP in the 1890s, until resigning in protest against the Boer War.  He became a globe-trotting campaigner for social justice, lecturing on several continents. He met a young Mahatma Gandhi, who was greatly influenced by Ireland’s experience. He corresponded with Sun Yat Sen, whose fight to overthrow Chinese feudalism he championed.

And he also somehow found time to be patron of a new football club in Glasgow – Celtic – where his duties included laying a sod of Donegal turf in the pitch at Parkhead.

But as with many politicians of his era, Davitt’s memory was to be eclipsed by the re-emergence of the physical force tradition (of which he had been a former exponent) in the decade after his death.

This was particularly unfair in his case, Sammon believes.  Hence the museum’s mission to remind people of the extraordinary amount of work Davitt crammed into his 60 years of life, most of it with only one arm (a writer in the visitors’ book has joked that Davitt achieved more with a single arm than others did with whole shipments).

From the windows of the pre-Penal church in which the collection is housed, you can see the location of the (longgone) cottage where Davitt was born in 1846.

The family was evicted when he was four. After a spell in the workhouse, they got a lift by cart to Dublin, caught the boat to Liverpool, and then walked 50 miles to East Lancashire, which would become their home.

That was where Davitt began working in a cotton mill at the age of nine and where, not long afterwards, he had his right arm so badly mangled it had to be amputated.

In his dire circumstances, this may have been a lucky break, because it earned him an education be would otherwise have missed, courtesy of a local philanthropist.

He then trained himself to be a one-handed typesetter, but by the end of his teenage years he was also heading for a career in revolutionary politics.

Davitt’s Fenianism and Land League period are familiar to most history students, and that too is well covered in the Straide museum.

But after the first Land Acts defused the crisis – at least in the eyes of Parnell and the Irish nationalist party – Davitt became more a more marginalised figure.

Militancy was on the wane then, for a generation, although in light of his subsequent obscuring, the date of Davitt’s last release from prison is telling. He left Portland Jail on what could be called a busy news day. It was May 6th, 1882, and the British Empire was about to be rocked by the assassinations in Dublin of Cavendish and Burke.