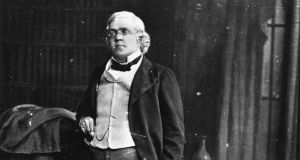 We are long used to hearing Irish mannerisms traduced by foreign interpreters, travel writers and filmmakers alike. Wild Mountain Thyme is only the latest perceived atrocity. One of the slightly less notorious examples in Hollywood history was Ryan O’Neal’s Tipperary accent for Barry Lyndon (1975), which ended up somewhere off the Azores.

But while reading the novel on which that classic film was based over Christmas, I was struck by how well-pitched the Irishisms of William Makepeace Thackeray’s original (1844) were.

Allowing for the comic nature of his story, and the fact that it’s set in the 1760s, it all seems oddly plausible. And if anyone’s accents are being held up to ridicule, it’s not the native population.

A running joke in The Luck of Barry Lyndon (the novel’s full title) is the way some English people then pronounced the eighth letter of the alphabet, still a vexed issue in these islands even today.

Here, for example, is Captain Quin, the timorous but eligible English officer, taking umbrage at news that his Irish betrothed, Nora Brady, has also been the target of amorous advances from the teenage Lyndon.

“It’s not the English way for ladies to have two lovers,” he protests haughtily, while the narrator (Lyndon himself, recalling the events from old age) points out in brackets that Quin has pronounced his nationality as “Henglish”.

After eventually settling their dispute in the Irish way – duelling – the hero is forced to flee the country, en route to epic feats of social climbing abroad. But some years later, cured of romance and now laying siege to the heart/bank account of a rich English widow, he finds himself needing to cut a deal with her doorman.

“But listen, you are an Englishman?” he asks the latter. “‘That I am,’ said the fellow, with an air of the utmost superiority. ‘Your honour could tell that by my haccent.’”

Indeed, his honour had been just double-checking, to be safe: “I knew he was [English] and might therefore offer him a bribe,” he explains to overseas readers, adding: “An Irish family servant in rags, and though his wages were never paid, would probably fling the money in your face.”

When the now-friendly doorman remembers that they have met before, on the continent, where the lady was taking the waters at a well-known health resort there, it allows Thackeray/Lyndon yet another chance to poke fun at his accent. “I recollect your honour at Spar”, they quote him saying.

The English get their revenge on Lyndon in the end, of course, although even then he looks back on his rise and fall with such undaunted cheerfulness that, scoundrel as he undoubtedly is, it’s obvious Thackeray can’t help liking him.

This is more than could be said of the writer’s relationship with Ireland in general.

In his Irish Sketch Book (1843), which preceded the novel, he had found many faults during a tour of a country then on the eve of a Famine that (like most visiting travel writers of the period) he did not foresee.

The weather didn’t help. It rained for two days when he was in Galway.

But that may have been a lucky break for his literary career, because while marooning him in Kilroy’s Hotel, it gave him a chance to catch up on his reading, and specifically on a handful of popular “chap books” he had bought for eightpence in Ennis.

These included the memoirs of one “Captain Freeny”, a gentleman robber from 18th-century Kilkenny, whose unshakeable self-confidence, freedom from conventional morality, and the “utter unconsciousness that he is narrating anything wonderful” may have given Thackeray the voice of his Irish anti-hero.

Slightly fictionalised as “Feeney”, the highwayman also earned a cameo in his own right, in both book and film.

Introducing my copy of the novel, Andrew Sanders notes that its fidelity to local detail was admired by the Young Irelander Charles Gavan Duffy, who met Thackeray in 1855 and found him “guardedly sympathetic” to Irish nationalism.

For the book’s accuracy, the novelist credited the many Irish people he mixed with in London and elsewhere.

Mind you, I did notice one small howler, involving the north Dublin suburb of Marino. Describing an incident there involving kidnap, elopement, and forced marriage, Thackeray/Lyndon locate the suburb “some miles from Dublin, on the Dunleary road”. No doubt all roads can lead to Dún Laoghaire, eventually. But as Thackeray might have been told had he asked directions for it in Marino: “I wouldn’t start from here if I were you.”