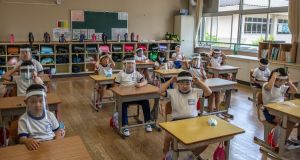 Children wearing plastic face visors in class at Kinugawa Elementary School in Nikko, Japan, on Wednesday. Schools that were in lockdown in Japan reopened this week. Photograph: Carl Court/Getty Images

Over the last month the Government has been lambasted for failing to reopen our primary schools. To support their arguments, critics have referenced other jurisdictions where primary schools had already reopened.

Few, if any, stories in the media focused on the earlier imposition of restrictions in other jurisdictions or the increasing numbers of cases and mortalities worldwide during this pandemic.

Here are the facts. From the moment our schools were closed, the INTO took a position that we must, at all times, be guided by the public health experts in this country. As a union, we recognise the extraordinarily difficult times in which we are living and the need for decisions to be made by those who truly understand the implications they will have on our response to this virus.

Without notice, and indeed in a manner never before envisaged in our primary education system, teachers around the country set up makeshift workspaces in their homes and ensured that pupils’ education continued, albeit in a radically different way. It’s true that not every pupil’s experience was the same. Decades of underinvestment in digital learning and broadband have created significant obstacles.

Out of concern for our most vulnerable pupils, and led by our members, we highlighted the impact the continued closure of our schools was having on our most marginalised. We called for, and secured, an extension to a critical school meals programme that provides a vital service. We have welcomed the Government’s plan for summer provision for those with special educational needs and those from disadvantaged backgrounds and fully expect that, when it is deemed safe to roll out these programmes, many of our members will again rise to that challenge.

After weeks of uncertainty, the Government finally announced that leaving certificate exams would be cancelled. From the primary perspective, we took this to mean that public health experts deemed it unsafe to gather students together in this manner at this time. This view was shared by Government when the Taoiseach announced primary schools would not reopen until September.

With a timeline in place, we sought, and secured, formal engagement with the Department of Education. We consulted our members to identify the challenges posed. Work is now ongoing to safely reopen our schools, in line with public health advice, and our members are eager to get back into their classrooms and in front of their pupils at the start of a new school year.

Against this backdrop, a narrative has begun to develop on the nature and risk the virus presents to children and the very young in society.

Scientific evidence is far from clear at present. Researchers are divided on whether children are less likely to become infected and on children’s capacity to spread the virus.

It’s a fact too that some schools in other jurisdictions that opened early had to close again – France and South Korea are two examples. We cannot afford to make that mistake here.

There is now a strong consensus that we can reopen our schools safely in August and we must all play our part to ensure this becomes a reality. Our pupils, their parents and of course primary teachers deserve nothing less.

Let me be clear, our primary schools will reopen at the beginning of the next term. There is the time, the willingness and hopefully soon the concrete guidance needed to support this plan.

In Ireland, in something of a national embarrassment, we have the largest class sizes in the euro zone. Many of our classrooms have more than 30 pupils, with our European neighbours enjoying an average of just 20 in a class. This matters when we look at applying social-distancing rules and is the reason why we don’t think, in line with current advice from Government, that it would be possible for all pupils to be in a classroom at the same time.

Inadequate funding plays a role too. Government investment in primary is a miserly one euro per pupil per day. In normal times, some schools struggle. Schools that are already struggling financially do not have the financial resources to pay for things such as additional cleaning. Those who suggest parents can chip in do not appreciate the financial pressure many families are under right now.

So why, many ask, don’t we just return to school tomorrow? In simple terms, our public health authorities and government have concluded that it is not safe. That’s not our decision to make. Our job is to heed the advice from experts and work constructively to ensure our schools reopen at the start of the next academic term.

In the coming weeks and months, school management teams will be busy applying the national guidance, expected shortly, to their local school environment. They will be working with their staff, liaising with parents and ensuring that when their school reopens, it will be a safe environment, in line with Government guidance. It’s imperative that schools are not left fending for themselves when it comes to vital resources to support this work and we will be demanding the Government provides adequate levels of support.

There is no doubt that Irish children have lost out during the lockdown. Undoubtedly a failure to reduce our class sizes or to properly invest in primary have exacerbated the current challenge. Both of these areas can, and should, be at the heart of the next programme for government and will ensure our primary system is well equipped to meet the challenges of tomorrow, whatever they may be.