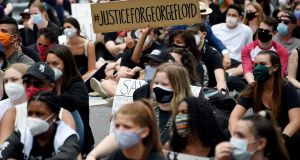 A peaceful protest against the death of George Floyd in Bethesda, Maryland. Photograph: Olivier Douliery/AFP via Getty

After I finished my PhD in 2000, I worked for a while at a charity in Washington DC that helped unemployed, mostly African-American, men and women, some of whom had just been paroled from prison or were trying to come off welfare, to find a job.

The clients, as they were known, had diverse backgrounds but all of them faced the same general challenge, namely how to find a job that paid enough to compensate for transportation and perhaps childcare costs and held some promise of stability. It was the holy grail, and no one, in my experience and that of fellow job counsellors, found it except in the charity sector. One client, an older woman for whom I found a job at a grocery store, tried for months and then finally quit, citing the continued verbal abuse and disrespect from her manager as the primary cause. This treatment, along with the long commute to work and the low pay, made staying untenable. I tried to interest unions in the work of the charity but, with the exception of a union with a large African-American membership, they were uninterested because of the perceived instability of this particular population.

International and American media covering the protests in the United States following the death of George Floyd in Minneapolis have focused especially on the stain of institutionalised racism, which the country in many ways has not confronted. Unfortunately, institutionalised racism is not unique to the US. What is singularly American is the combined historic legacy of racism and the more recent, full-throttled embrace of the market economy, to the detriment of public institutions and trust in the state. The current protests embody both. Trends in welfare reform, the privatisation of the penal system and precariousness in the job market, among others, all allow for the reproduction of racial inequality.

I worked at that DC charity after the passage of the 1996 Personal Responsibility and Work Opportunity Act, aptly named for the ideological position it represented. The Act introduced limits on welfare payments, in principle, to break “the cycle of poverty” and reduce “dependency” on the state. However, the rhetoric of pushing those who could work on to the job market missed just how bad the jobs could be, how little opportunity there was to move to a better job and how difficult it was to aspire to a better quality of life for you or your children.

Two decades later the bias among police officers that has influenced unnecessary use of force and repeated acts of violence against African-American men is replicated in hiring practices and housing. Poverty rates among African-Americans remain higher at a national level than for any other minority except Native Americans. The disproportionate number of cases of Covid-19 among African-Americans reflects unequal access to health services and other factors such as education, living conditions, diet (and availability of healthy food) and related prevalence of diseases such as diabetes, which increases risk of death from coronavirus.

The lack of safety net in the US generates a particularly damaging economic insecurity and desperation, which allows for forms of exploitation and oppression that are more historic and visible than in other wealthy countries.

What is wrong with America is apparent in the reliance on food stamps, which grew an average of 395.9 per cent between February 2019 and the same month this year

The best response to the protests would be to contextualise racial inequality within a wider debate about the social responsibility of the state, the pernicious effects of inequality on all members of a society and the need to engage in collective action to face common problems, even if these problems affect some groups more than others.

In his 2008 speech on race, then presidential candidate Barack Obama explained that “if we simply retreat into our respective corners, we will never be able to come together and solve challenges like healthcare or education or the need to find good jobs for every American”. Obama had made the speech in response to criticisms of his former pastor Rev Jeremiah Wright, who had repeatedly denounced the American government for failing African-American citizens. Though not disowning all of his views, Obama criticised Wright for going too far, for perceiving “white racism as endemic” and emphasising “what is wrong with America above all that we know is right with America”.

What is right with America, despite the current political situation, is, as Obama notes, the ability to come together. This capacity was mentioned by former vice-president Joe Biden in his speech on June 2nd, and in a recent article by the philosopher Cornel West, who sees in the plurality of peaceful protesters the shared desire for positive change, “regardless of the odds”.

1 Many people identified as close contacts refusing to come forward for Covid-19 testing
2 David McWilliams: ‘Ireland is three decisions away from being a perfect country’
3 Two in custody after Ryanair flight to Dublin forced to divert
4 My aunt never told us that Gran passed away with no will
5 A US food writer moved to Ireland. Here’s what he found
Real news has value SUBSCRIBE