Are Church of Ireland bishops about to fail their vast middle ground? 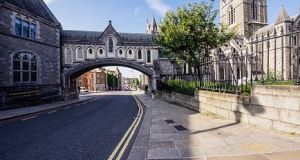 Christ Church Cathedral in Dublin. The Church of Ireland, although a small church, has played a significant role within the worldwide Anglican Communion. Photograph: Getty Images

On Wednesday the House of Bishops will decided whether to affirm the appointment of Archdeacon David McClay as Bishop of Down and Dromore, the largest diocese in the Church of Ireland.

Although respect is due to his work as a rector, his election as bishop is deeply troubling, and many people from all over the island have written to the bishops to express their grave concern.

Archdeacon McClay is a member of the council of Gafcon (Global Anglican Future Conference) Ireland, an organisation which opposes amongst other things same-sex marriage and the ordination of homosexuals.

So why object to Archdeacon McClay’s appointment? Because the policy and doctrine of the Church of Ireland are decided by the General Synod.

That the Church of Ireland is Irish seems a truism. Currently we are celebrating the 150th anniversary of disestablishment or break from the Church of England. An Ireland-wide synodical structure was hewn out to give representation to every church member from Belfast to Ballybunion.

Policy and doctrine are not decided by interest groups outside this forum, not in Gafcon or anywhere else

This democratic structure at parochial, diocesan and island level has succeeded in providing a system of checks and balances between very diverse political, theological and cultural traditions, enabling us to be enriched by this diversity.

There may be battles royal at General Synod over the ordination of women, the remarriage of divorced persons or same-sex marriage, but there is a shared fundamental belief that this and only this is the ultimate decision-making body of the church for it comprises its bishops, priests and people.

Policy and doctrine are not decided by interest groups outside this forum, not in Gafcon or anywhere else.

Gafcon was founded in reaction to the election of an openly gay Gene Robinson in 2003 as Episcopal (Anglican) Bishop of New Hampshire in the US.  Defining itself as the “authentic” form of Anglicanism, its members refuse to take part in the Lambeth Conference of 2020 – a key gathering of bishops from all over the communion. Albeit schismatic in policy, Gafcon is resolutely intent upon infiltrating extant Anglican communities nationally and globally.

The Church of Ireland, although a small church, has played a significant role within the worldwide Anglican Communion. In 2006 our former primate Archbishop Robin Eames was awarded the Archbishop of Canterbury’s award for outstanding service to the Anglican Communion, the only other recipient of that award being Archbishop Desmond Tutu. The Bishop of Limerick, the Rt Revd Dr Kenneth Kearon, was secretary general of its consultative council from 2004 to 2014.

There is a fundamental conflict of interest between being a member of Gafcon and upholding the unity of the Anglican Communion by the Church of Ireland.

In 2020 we celebrate 30 years of the ordination of women to priesthood and the episcopacy. Although we women have led parishes now for decades, we have a long way to go to honour fully the commitment made in 1990 as at present we have only one woman bishop, two women deans and one woman archdeacon holding senior office.

Gafcon is founded upon, sustained and energised by its homophobic agenda dictated by a toxic combination of selective use of biblical texts and cultural prejudice

Gafcon proclaims a policy of male headship. Women may serve as useful ordained foot soldiers but not as bishops.

Allegiance to an ideology of male dominance is simply not acceptable, and antithetical to the dignity and calling given to us by Christ.

Finally, Gafcon is founded upon, sustained and energised by its homophobic agenda dictated by a toxic combination of selective use of biblical texts and cultural prejudice. To scapegoat is utterly abhorrent to so many of our parishes for whom diversity is a quiet reality.

In Waterford we are blessed and enriched to have a community comprising people from Swaziland to Kiev, from Ballybricken to Bangalore, gay and straight, for we worship as disciples of Christ before God as equals.

The real future of the church lies in our ability to embrace our diversity because of the love of God shown in Christ. It does not and can never lie with splintering supremacism, scapegoating and demeanment.

They will have failed Christ.