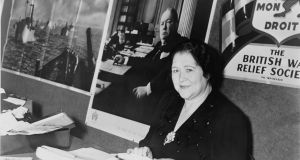 Bridget Stuart-Houston, who died 50 years ago on November 18th, began life as Bridget Dowling and was for a time sister-in-law to Adolf Hitler

Bridget Stuart-Houston, who died 50 years ago on November 18th, began life as Bridget Dowling and was for a time known as Bridget Hitler, sister-in-law for a period to Adolf Hitler, thus providing him with a family connection to Ireland. It would not be a connection of which decent people would boast, which probably explains why it is relatively unknown.

We know from her gravestone in the Holy Sepulchre Catholic Cemetery in Coram, Long Island, that she was born on July 3rd, 1891, in Dublin but not much is known about her early life.

From the 1901 Irish census, we learn that she grew up at Fleming Place, near Mespil Road, Ballsbridge.

There is some disagreement about how she met Alois Hitler, half-brother to Adolf. She might have met him while working as a cook in the Shelbourne Hotel but the more common version, based on what purports to be her own memoir, My Brother-in-Law, Adolf (published posthumously in 1979), was that they met at the Dublin Horse Show in 1909.

He was stylishly dressed and told her he was a hotelier touring Europe when he struck up a conversation with her. In fact, he was a kitchen porter at the Shelbourne Hotel.

The young Bridget was smitten with the good-looking, exotic foreigner and they began to go out together, much to her family’s disapproval. They eloped to London in 1910, where they got married and later settled in Toxteth, Liverpool. Bridget’s relations with her family had become distant but reconciliation occurred when she had a son, William Patrick, called after her father, in 1911.

In the published memoir, she claimed that 23-year-old Adolf came to stay with them in Liverpool from November 1912 to April 1913 but historians have found sources that show he was in Austria at this time.

Alois struggled to provide for his family in England (the extent to which he tried or wanted to is debatable) and went to Germany in 1914, promising to send for them when he was secure. The war intervened, they did not hear from him and Bridget presumed he was dead. She worked to raise their son and her family in Ireland supported her.

But Alois was not dead. He had opened a restaurant in Berlin, which later was popular with senior Nazis, and had numerous affairs before remarrying bigamously. Bridget learned of his second marriage when he wrote to her begging her to say their marriage had been illegal (he had been charged with bigamy). She refused, as this would have made their son illegitimate, but in the court case that followed she curiously defended Alois by writing to the court that he honestly believed he was free to marry in Germany. In this way he escaped prison and had reason to be grateful to her.

William Patrick visited his father in Germany in 1929 and returned there in 1933 when his uncle Adolf Hitler became chancellor.

For various reasons, relations between uncle and nephew became fraught, and William Patrick returned to his mother in north London, where she ran a boarding-house.

It seems to have been the death (probably by suicide) of Hitler’s niece Geli, with whom the future fuhrer had had an unhealthy relationship, that decided him to leave Germany. In England, he capitalised on the family connection to give interviews and write articles about his increasingly prominent uncle, whom he described as a “madman”.

He and Bridget went to the US in 1939, where he was invited to give lectures on Hitler.

They decided to settle there. During the war, William Patrick served in the American navy and was honourably discharged in 1947.

He and his mother settled in Long Island, New York, where they changed their name to Stuart-Houston and lived quiet, obscure lives.

William Patrick married and had four sons, one of whom died young. He himself died suddenly in 1987 and was buried with his mother. None of his sons had children; it has been suggested that they made a pact not to have children in order to end the Hitler bloodline but there is no proof that this was the case.

Bridget’s dubious memoir inspired Beryl Bainbridge to write Young Adolf, a fictional account of his supposed visit to Liverpool, where he lolls around his in-laws’ house, displaying many of his sinister character traits. Someone in the little group who see him off from Lintz remarks: “Such a strong-willed young man. What a pity he will never amount to anything.”

1 Des Bishop: ‘The last time my mother spoke was to say sorry’
2 Dublin house deaths: Three young children named
3 A Ryan Tubridy interview takes a terrifying twist
4 Some get up early to go to the gym, others because they slept in a doorway
5 TikTok boom: The app exploding in popularity among Irish teenagers
Real news has value SUBSCRIBE