An Irishwoman’s Diary: In the shadow of the pooka at Halloween

Harvey was a benign pooka, not at all like my Dad’s fearsome white rabbit 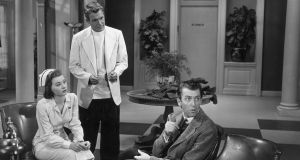 James Stewart talking to his imaginary rabbit while Peggy Dow, as a nurse, and Charles Drake, as a doctor, look on, in a still from director Henry Koster’s film, Harvey. Photograph: Hulton Archive/Getty Images

It was an old late-night black-and-white film on television that took me back to long-ago Halloween times in our house.

I watched James Stewart play the part of Elwood P Dowd a genial bachelor in small-town America who was a bit too fond of the drink.

On his way home one evening, no doubt somewhat inebriated, he came across a 6ft white rabbit leaning on a lamp post.

When Elwood arrived home and tried to introduce his new friend to his long-suffering sister, Veta, she was unable to see him.

Harvey, the white rabbit was, in fact, invisible to everyone except Elwood. Veta was convinced that her brother had met the Pooka.

It was the mention of the Pooka that took me back to our house on those long-ago Halloween nights.

My father was always in his element organising the traditional rituals to scare the wits out of us.

As soon as darkness fell, Mam made our tea and served thick slices of home-made buttered barm-brack.

I never, ever found the ring in my slice to be the first of our family to marry.

Somehow my brother always got it in his slice and he was, as foretold by the barmbrack, the first of our family to marry.

Next, Dad speared apples onto a wooden star-shaped contraption he had constructed and suspended it on a rope from the landing at the top of the stairs. He spun it around, and with our hands behind our backs, we attempted to bite off the apples.

Mam usually intervened before we knocked out our front teeth and we moved on to try retrieving three-penny bits from the bottom of a basin of water.

We nearly drowned in the process but the money always remained where it was.

Eventually, worn out and wet, we settled ourselves around the fire and waited as Dad lit his pipe and began his Halloween scary story.

“It was a dark, dark Halloween night as I walked home. A sudden gust of wind swept up fallen leaves and they swirled around me like black bats. A thick fog engulfed me and then I heard the sound of heavy footsteps behind me . . .”

Here he paused, drew on his pipe and we shivered waiting for the next line.

“I turned around and there I saw a big white rabbit with eyes like burning coals.

Of course, he battled ferociously with the Pooka and always won so that the story ended happily.

In that late-night film on TV it was the mention of The Pooka that had me wondering if someone had heard one of my Dad’s stories.

But the Pooka is part of our Celtic heritage and stories abound of his appearing to people who need to be pulled into line.

He usually appears in the form of an animal – a horse or a fox, and in this film, he is Harvey the huge rabbit.

So, whoever wrote the story of Harvey had to have some Irish connection.

And indeed, she did, she was Mary Agnes McDonough Coyle Chase, a journalist living in Denver, Colorado. She had four bachelor uncles who regaled her with Celtic legends that they had heard themselves back in Derry. Thus, the Pooka – but a nice Pooka – came to life on Broadway in 1944.

Alas, the play was not doing very well until a suggestion was made that, instead of an actor wearing a silly-looking rabbit costume, Harvey should be invisible.

It became a resounding success and ran for almost 2,000 performances.

But Harvey was a benign Pooka, not at all like my Dad’s fearsome white rabbit. He doesn’t match up either with a story I heard here in Co Kildare.

They tell me that the Pooka appeared in the form of a black horse as the Kildare Hunt rode out from Naas. To make a long story short, the entire hunt, dogs and all, ended up drowned in the Liffey, with the black horse, alias the Pooka, laughing raucously at the other side of the river.

Harvey may be the Pooka with the harm taken out of him, but somehow I prefer my father’s version. So, after the late-night film as I make my way to bed, I shiver as I see a big fox coming out from under the high hedge. Is that the Pooka coming for me?