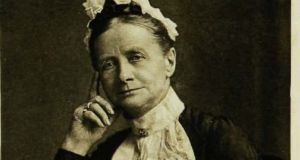 Cecil Frances Alexander (née Humphreys), credited by many as the greatest hymn-writer in the English language, was born in 1818 at 25 Eccles Street, Dublin, to Maj John Humphreys and his Irish wife Elizabeth Frances (née Reed).

Many English-speaking countries are still familiar with the refrains of All Things Bright and Beautiful, Once in Royal David’s City and There is a Green Hill Far Away.

Six of the 400 hymns that she wrote are featured in the present-day Church of Ireland hymnal.

Hymns for Little Children, her most sought-after publication, published in 1848, appeared in at least 69 editions. Her poems were admired by Alfred Lord Tennyson and Mark Twain.

Her Norfolk-born father John Humphreys enjoyed the patronage of John James Hamilton, the first Marquis of Abercorn. It has been suggested by Alexander’s biographer that he was the Marquis’s illegitimate son.

Shelton Abbey: A home of castellated Gothic Revival splendour, today the family seat is known in its role as an open prison

Fanny, as she was known to family and friends, was named after the Marquis’s daughter Cecil Frances Hamilton. In 1816 Cecil Hamilton had married William Howard, Lord Clonmore. In 1818 Howard became the fourth Earl of Wicklow, taking up residency at Shelton Abbey. A home of castellated Gothic Revival splendour, today the family seat is known in its role as an open prison.

John Humphreys was employed as the Earl’s principal land agent, moving from Dublin to take up the role. From 1825 to 1833 Fanny’s home was Ballykeane House, near Rathdrum.

She collaborated with the daughter of her father’s employer Lady Harriet Howard in writing religious tracts, publishing Verses for Holy Seasons and the Lord of the Forest and His Vassals, in 1846 and 1847 respectively.

The Howards had an artistic bent. Lady Harriet’s governess Charlotte Lydia Polidori was the aunt of Dante Gabriel Rossetti, the Pre-Raphaelite poet and artist. Seminal to his success, Polidori supported her nephew financially and in introducing him to potential patrons.

Christina Rossetti, Dante Gabriel Rossetti’s sister, was the author of the popular Christmas carol In the Bleak Midwinter.

Mrs Alexander’s connection with this artistic milieu perhaps contributed to her sense of the picturesque, particularly strong in her work. The prized natural beauty of her Wicklow environs must also have influenced her sensibility.

Fanny Alexander, like Christina Rossetti, was influenced by the writings of the Oxford Movement. It sought a return to the observation of the traditional rites of the church, as practised before Reformation. The movement shared the romantic sensibilities of the Pre-Raphaelites. Tractarians saw poetry as a natural form for religious expression and they were influenced by romantic literature, current at the time.

The writings of John Keble, one of the movement’s leaders, offered ways in which emotions, considered the Achilles heel of women, often leading them astray, might be disciplined and harnessed into verse. The disciplined female sensibility would be able to produce valuable work in the service of God. It was Keble who edited Mrs Alexander’s Hymns for Little Children.

Fanny actively engaged in a range of charitable works in the city, funded largely by income from her books

Alexander’s works are part of a larger body of Christian hymns written by women of the period. Through hymn writing they were accepted in a realm where they would not otherwise have had status.

Marriage in 1850 to William Alexander, a clergyman from Derry, gave Mrs Alexander the name we associate her with. Six years his senior, her birth date is often wrongly recorded to hide the embarrassment she or her family felt in her seniority. The couple settled in Derry on William Alexander becoming bishop of Derry and Raphoe. Fanny actively engaged in a range of charitable works in the city, funded largely by income from her books.

Links were maintained with the south of Ireland. A son, Cecil John Francis “Sprig” Alexander, married Eva Frances MacMorrough in 1882. She was a daughter of Arthur MacMorrough Kavanagh, of Borris House in Co Carlow.

Mrs Alexander died in 1895 and is buried in Derry, on the hillside cemetery which inspired her arguably most accomplished hymn, There is a Green Hill Far Away, which is appreciated for its simple explanation of a complex biblical concept.

Her hymns and those of other women were written when women had neither the vote nor property rights. Subversively perhaps, they ensured that a female agenda was sung out every Sunday by men and women alike.

1 No obvious signs of injury on remains of McGinley children
2 Why our love for Leo is withering on the vine
3 Dancing with the Stars: Glenda Gilson sinks like Titanic
4 Una Mullally: Those attacking Sinn Féin have become cheerleaders in reverse
5 Fine Gael to stress economic warnings as campaign enters crucial week
Real news has value SUBSCRIBE