Most heinous sin? Misogynistic legacy of Canon Law and abortion

Rite&Reason: Women have been targeted for excommunication ahead of abusers, murderers and rapists 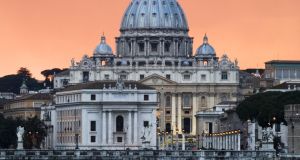 The Vatican: The Catholic Church considers that abortion is the worst sin a human can commit, and that terrorism and child sexual abuse are less serious sins.

In 2009, a nine-year-old Brazilian child had to have an emergency abortion when her mother brought her to hospital with stomach pains. The doctors discovered the girl was four months pregnant with twins. The little girl had been raped repeatedly by her stepfather.

Following the emergency procedure, the Catholic Archbishop of Olinda and Recife, José Cardoso Sobrinho, stated that automatic excommunication had been incurred by the child’s mother and the medical team who performed the abortion.

Archbishop Cardoso was a former professor of Canon Law in Rome and would have been very familiar with Canon 1398 of the Code of Canon Law. He did not excommunicate the rapist.

This is therefore a discretionary rather than an automatic penalty. Such a legal procedure does not apply to a woman or the medical team who treat her in an abortion case.

In 2010, Sr Margaret McBride, a Mercy sister, sanctioned an abortion on a 27-year-old woman with a fifth pregnancy, who was suffering from pulmonary hypertension. Sr McBride was a member of the Ethics Committee of St Joseph’s Hospital in Phoenix, Arizona. The medical opinion was that the woman had a 100 per cent chance of dying if she continued with the pregnancy.

Sr McBride was informed by the Bishop of Phoenix Thomas J Olmsted that she had incurred the penalty of automatic excommunication (latae sententiae).

Dr John Garvie, chief of gastroenterology at St Joseph’s Hospital in Phoenix, described Margaret as “the living embodiment of God, she worked tirelessly and selflessly as the living champion of compassionate, appropriate care for the sick and dying”.

Canon Law is the internal law of the Catholic Church, a body of laws that governs the church. It is not a substitute for faith. It was first codified (in Latin) in 1917 with 2,414 canons. The 1983 code is the most recent version, published after Vatican II, and has 1,752 canons and is available in the vernacular.

None of this explains why the Catholic Church considers that abortion is the worst sin that a human can commit, and that terrorism and child sexual abuse are less serious sins

Canon 1398 of the 1983 code states: “A person who actually procures an abortion incurs a latae sententiae excommunication.” Excommunication means that a person is forbidden to participate in the Eucharist or any other sacraments. It is the most severe penalty possible under Canon Law.

Canon 1323 sets out the exceptions to the general punishment – if the person who violated the law is under 16, was ignorant of the law, was forced, acted out of fear, or out of self-defence or lacked the use of reason.

Automatic excommunication applies in other instances including apostasy (total repudiation of the faith), heresy (the denial of a defined doctrine), schism (the refusal to submit to the authority of the pope) (1364), violating the sacred species (1367), physically attacking the pope (1370), sacramentally absolving an accomplice in a sexual sin (1378), consecrating a bishop without authorisation (1382), and directly violating the seal of confession (1388).

However, none of this explains why the Catholic Church considers that abortion is the worst sin that a human can commit, and that terrorism and child sexual abuse are less serious sins and where the perpetrator is entitled to due process before any penalty is imposed.

The automatic excommunication for carrying out an abortion is one without conditions, no taking account of circumstances such as the women being close to death, or the child, in the case of the nine year old in Recife, or a woman suffering physical or mental illness.

The misogynistic legacy of the Catholic Church in Ireland has a long history. Recent revelations about the mother and baby homes and forced adoptions remind us of the callous and un-Christian treatment of many young girls. Most of the Christian churches have by now read the signs of the times and recognise the equality of their women members.

Only the Catholic Church continues to oppose so-called artificial contraception, assisted human reproduction and divorce, and forbids the ordination of women. Such a misogynistic legacy is starkly visible in Canon 1398 of the Catholic Church.

The reputable and widely-read US publication the National Catholic Reporter, along with other publications, has referred to a 1994 report by Sr Maura O’Donohue, an Irish Medical Missionary of Mary doctor who worked all her life in Africa. The report recorded the procuring of abortions for some missionary nuns in the then Belgian Congo who had been raped by soldiers and by priests.

Perhaps the rationale for treating abortion as the most heinous sin lies in the fact that the Catholic Church only sees women in terms of maternity, and not as human beings with their own inalienable rights.

Gina Menzies is a theologian and a lecturer in bioethics