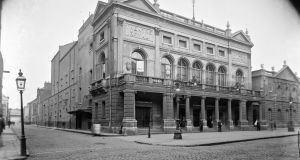 The last of the five Theatre Royals was demolished in 1962. Photograph: Eason Collection/National Library of Ireland

During this decade of anniversaries, we are often told that Dublin used be the second city of the United Kingdom. And it was, for about five decades. In 1801, when it had a population of 175,000 people, only London, with over a million people, was larger, but by 1851 Dublin had been overtaken by the bustling industrial cities of Glasgow and Liverpool.

The departure of many affluent families following the passage of the Act of Union initiated a period of decline but not a complete collapse. The old parliament house in College Green was sold to the Bank of Ireland and, following a reconfiguration of the House of Commons Chamber, it became the bank’s headquarters in 1808. Nelson’s Pillar was also erected in that year.

In 1815, work began on a large Catholic chapel in Marlborough Street, an “unfrequented thoroughfare”. Later, as the metropolitan church of the archdiocese of Dublin, it would be known as St Mary’s Pro-Cathedral.

In 1816, two new bridges were built over the Liffey and a third was started. Meanwhile work proceeded on the erection of the General Post Office which was opened in 1818. But that year also saw the withdrawal of a royal patent from the city’s only significant theatre, the Theatre Royal in Crow Street, in Temple Bar, and the consequent loss of its right to use the name. Its closure soon after ended another chapter in the chequered cultural history of the city.

Dublin’s first theatre was opened by a Scotsman, John Ogilby, in Werburgh Street in 1637 and given a patent by Charles I but it was closed by the lords justices following the outbreak of the rebellion of 1641.

Ogilby returned to Dublin in 1662 after being appointed master of the revels in Ireland by Charles II and given power to license theatres, select plays and hire actors. He then erected a new theatre at Smock Alley, later Essex Street West, and obtained a fresh patent. It closed in 1701 but another theatre was built on the site in 1737 and remained open until 1787. The building then became a warehouse and was demolished and replaced by Saints Michael and John’s Catholic Church in 1815. Yet another theatre succeeded the church on the site in 2012.

The failure of the Smock Alley theatre was due in part to competition from the theatre opened at Crow Street in 1758, and following its closure the royal patent was transferred to its rival.

The demise of this theatre in 1819 provided an opportunity for Henry Harris, the chief proprietor of the Covent Garden Theatre in London to try his luck in Dublin. He purchased a site in Hawkins Street, near College Green, from the (Royal) Dublin Society which had moved to Leinster House in Kildare Street, and built a theatre with a capacity for 2,000 people. It opened on January 21st, 1821, and became “Royal” following a visit by George IV in December.

It is best remembered as the location of a “bottle riot” in 1822. The new lord lieutenant, Marquess Richard Wellesley, had offended the city’s Orangemen by condemning their practice of parading around the statue of King William in College Green on November 4th.

When Wellesley visited the theatre on December 14th to see productions of Henry Fielding’s Tom Thumb and Goldsmith’s She Stoops to Conquer, about 100 members of an Orange lodge that had bought tickets entered the gallery. As the national anthem was being played at the end of the night, they began to hiss and groan to the accompaniment of noises from a large wooden rattle. A bottle was thrown from the gallery and hit the stage curtain. while the owner of the rattle broke it in two and flung the pieces at the viceroy’s box. Nobody was injured and when some of the audience were later charged with rioting and disturbance, the jury disagreed and the case was dropped.

Apart from plays, the theatre staged Italian operas almost every year, including the years of the Great Famine. It continued to be the city’s main theatre, although it suffered some competition, especially from the Tivoli on Burgh Quay and the Adelphi, later the Queen’s Theatre, in Great Brunswick (Pearse) Street, until it burned to the ground in 1880.

The next theatre on the site opened in 1897 and was replaced in 1935 by a huge building that could accommodate 3,700 people seated and some hundreds standing. This last of five Theatre Royals was demolished in 1962 and the site became the location of Hawkins House, one of the modern city’s least liked buildings. It, in turn, is now being demolished to make way for a major development of the area.

Through all the changes, the name of Hawkins Street has remained unchanged. It commemorates William Hawkins, a 17th-century entrepreneur who built a wall along the south bank of the Liffey and converted the area from a slob to dry land.