Knees and the Man – Frank McNally on 1,000 years of war and peace in Islandbridge 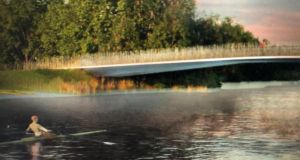 An artist’s impression of the proposed new bridge at Islandbridge

Exactly a thousand years ago on this date, if the annals are correct, a great battle took place near Dublin, at Islandbridge. It pitched a coalition of Irish chieftains, under high king Niall Glún-dubh (“Niall of the Black Knee”) Mac Aeda, against the Norsemen under Sitric Cáech. The Irish lost, heavily. Several of their lesser kings died in the battle, along with the main man.

I can’t find an explanation anywhere for Niall Glún-Dubh’s nickname. If “Black Knee” was a medical condition, it’s not something that even Google Doctor seems to have heard of. But in at least one collection of Irish folk takes and legends, he is also referred to as “Niall of the Black Knees”, plural, so it may have been spreading.

In any case, whatever about his knees, his heart was not black. The folk tale records his great kindness to a cousin, a beautiful woman named Gormley, when she was trapped in a loveless marriage. He even took the trouble of marrying her himself after the husband expired.

She was then once more bereaved by the events of September 14th, 919, and came to a grisly end years later when, roused from sleep to see him apparently standing by her bed, she tripped and impaled herself on a bedpost, whereupon: “Her heart was opened, she shed out her life blood, and died raving of her well-loved Niall.”

Descriptions of the Islandbridge battle had formerly led historians to think it happened elsewhere, at Kilmashogue in the Dublin mountains. But more recent research has relocated it to the banks of the Liffey just west of what is now Heuston Station.

And there is a logic to this, since the Irish forces approached Dublin from the north, meaning they would have had to cross the river to reach the Norse city.

There was an ancient fording point at Islandbridge, which excavations for the railway and since have also shown to be an important Viking burial site.

Those of you old enough to remember the Millennium – when, as the slogan said, “Dublin is Great in ’88” – may be wondering why the city was being fought over so fiercely in 919, seven decades before its alleged foundation. But the Millennium was a rare case of public relations people understating their client’s credentials, because even in 1988, Dublin was quite a bit older than 1,000.

The milestone marked only a date when another Sitric, nicknamed “Glún Iarainn” (“Iron Knees” – knees were very important in those days, clearly), agreed to observe Brehon law and pay taxes to the Irish high king. Thus the millennium celebrated 1,000 years of tax compliance in Ireland, at least by Dubliners.

So far as I’m aware, there is nothing in Islandbridge to commemorate the 919 battle. The site is instead these days synonymous with the memorial to a much greater conflict, Edwin Lutyens’s tribute to the dead of the first World War, which was completed just in time for the second.

Actually the project was not quite finished then. Lutyens had also planned a bridge across the Liffey opposite the gardens’ high cross, but money ran out. His 150th birthday, last March, was the deadline for a new competition to complete the job, won by a London firm of architects whose proposed bridge would be “the most slender and shallow structural arch that is technically possible”, with railings like river reeds.

Pending construction of that, the Office of Public Works also marked the anniversary by adding a series of eight information panels about Lutyens’s life and work, which now fan out in a semi-circle from gardens to river.

Other monuments to past conflict here, arguably, include the swans swimming nearby: possible descendants of a breeding pair presented to the Liffey by Free State senator Oliver St John Gogarty in the 1920s, in gratitude for his water-borne escape from IRA assassination during the Civil War.

According to different accounts of the incident, it was either by pretending to go to the toilet or to say a final prayer that he eluded his kidnappers long enough to dive into the river. The former seems more plausible. Speaking of knees, if Gogarty’s were black, it wasn’t from overuse in church.

His mock-religious cameo in Ulysses suggests a rather impious personality. But then again, as a lesser literary work of the era hints, this might have been to his advantage that night in Islandbridge. An anonymous 1924 ballad about his escape includes the lines: “To this appeal his brutal guard was unable to say nay/He was so amazed that Oliver St John Gogarty could pray.”

3 What can Ireland expect from Joe Biden?