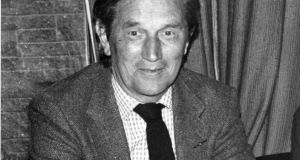 Noël Browne: had the chance to commemorate his own family’s RIC background late in life but chose not to

As the commemoration debacle wanes and the general election campaign waxes, it may be interesting to recall that there once existed in Dáil Éireann a party whose entire parliamentary membership comprised children of former RIC men.

They called themselves the National Progressive Democrats – not to be confused with a near namesake of more recent date.

And when I say the party’s deputies were all the offspring of RIC men, in truth, it had only two TDs in a short-lived career, which spanned a few years either side of 1960.

But including as these did the famous Noël Browne, the NPD had an influence far beyond those numbers. The then-taoiseach Seán Lemass considered it “the real opposition” for a time, before it was wound up and merged with Labour in 1963.

As for the RIC heritage, that was probably just a coincidence, although it’s a matter of record that, had fate allowed, their numbers might have been swelled by a third man of similar parentage: this newspaper’s late and long-time GAA correspondent Paddy Downey.

Yet another son of an RIC man, Downey revealed in later years that he had once considered running for the NPD, but couldn’t afford the election deposit of £100.

A mere quirk of Irish election history as it may be, the story of the policemen’s party does also include a detail that, in light of the abortive commemoration, seems telling: when Browne had the chance to commemorate his own RIC background late in life, he chose not to.

His 1986 memoir Against the Tide remains one of the biggest selling and most influential books of its kind in Ireland.  But here is how it sums up his early years and paternal heritage: “We had moved from Waterford, where I was born on 20 December 1915. My father, unemployed and the unskilled son of a small farming family in Co Galway, brought us shortly after my birth to Derry, where we lived for a time in the Bogside. He obtained work in one of the shirt factories.”

To have had RIC parentage was far from unusual in the early years of independence, even among republicans

The detail about the shirt factory is true. And yet as a later Browne biography, John Horgan’s Passionate Outsider (2000), says of it, that passage is “brief to the point of opacity”.

Before the move to Derry, Browne snr had been a policeman for the best part of 30 years, rising to sergeant, which was as high as Catholics could usually aspire to in the force.

The changing politics after 1916 forced him to rethink his position, but he did not leave the police until 1918, a few months before the War of Independence.

After the shirt factory, he went on to become a “cruelty man”: an inspector for the National Society for Prevention of Cruelty to Children, a standard enough progression for former police officers.

To have had RIC parentage was far from unusual in the early years of independence, even among republicans. And the young Noël Browne was very much a republican, joining Seán MacBride – a former IRA chief of staff – in Clann na Poblachta and sharing its spectacular electoral success in 1948.

By the late 1950s, however, when what remained of the IRA launched its doomed “Border Campaign”, Browne’s politics had evolved away from traditional Irish republicanism.

Clann na Poblachta had in the meantime disintegrated, after the collision between his Mother and Child Scheme and the church. So he and fellow policeman’s son, Jack McQuillan, left it to form the socialist NPD in 1958, retaining their seats in the only general election the new party fought, in 1961.

Still a common insult in Ireland, 'get' is a cross between Hiberno-English and the Bible. It means 'bastard', more or less

Lemass’s admiration for their opposition may or not have been shared by his tánaiste from 1959, Seán MacEntee. Certainly, MacEntee was a feisty opponent of Browne in the Dáil. He had been his “marker” when Fianna Fáil was in opposition.  And both inside and outside Leinster House, he liked to use Browne’s RIC background against him.

His derogatory euphemisms included reminding Browne that he had been reared “on an Article 10 pension” (referring to legislation that guaranteed the superannuation of former RIC officers). Less subtly, he sometimes referred to him in conversation as an “RIC man’s get.” Still a common insult in Ireland, “get” is a cross between Hiberno-English and the Bible. It means “bastard”, more or less.

It’s possible, if not plausible, that in glossing over his father’s police career in Against the Tide, Browne didn’t consider it relevant. Whatever the reason, it was not an accident.

When an editor learned of the detail before publication, she wrote to him suggesting it be included. But as Horgan notes, Browne’s reply was “telegrammatic”.

On the margin of the letter, he wrote “No”.