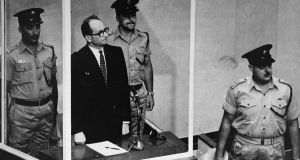 The story of how Adolf Eichmann, one of the architects of the “final solution”, was brought to justice features in the film The People vs Fritz Bauer. Photograph: The United States Holocaust Memorial Museum

Just back from Japan last autumn and full of renewed admiration for that extraordinary country, with its endless resilience, efficiency, and decorum, I met a Korean man who reminded me of the case against.

He didn’t disagree with the good points. His regret was that, beyond occasional apologies, often qualified, the Japanese had never sufficiently acknowledged the horrors inflicted on Korea and other neighbours before and during the second World War.

This failure began during the US occupation, he said, when it was deemed politic to leave certain people in positions of power, for stability’s sake. That set the pattern. Ever since, Japan had failed to face up to its past fully, “unlike Germany”.

We’ll come back to Japan another day, perhaps. But I was reminded of the conversation by a film screening in Dublin on Tuesday night, which explained how the Germans exorcised their guilty past in the years after the war. Or more exactly, how they didn’t – at first – until a few determined individuals forced them.

The conflict came to a head when Bauer received a tip-off that Adolf Eichmann, one of the architects of the 'final solution', was living under a false name in Argentina

The People vs Fritz Bauer tells the story of the eponymous state prosecutor who, in the 1950s, found his attempts to put various former Nazis on trial thwarted, mysteriously or otherwise, at every turn.

After the Nuremberg trials brought some of the greatest offenders to justice, many others had quietly resumed their positions in business and public life. One former Nazi minister, Hans Globke, implicated in the anti-Jewish race laws, had even somehow reinvented himself as chief of staff in Konrad Adenauer’s postwar government.

Like Japan then, Germany was in the process of a near-miraculous recovery. People wanted to look forward, not back. Some wanted that more than others.

Bauer’s determination to bring leading Nazis to justice, not simply for justice’s sake but also for the public education it would involve, was up against everything from the passive silence of those keeping their heads down to an active network of protection the most powerful enjoyed.

The conflict came to a head in the late 1950s when he received a tip-off that Adolf Eichmann, one of the architects of the “final solution”, was living under a false name in Argentina.

Being himself Jewish and haunted by the compromises he had made to survive, the prosecutor knew that here could be the exemplary lesson he hoped for, and that if Eichmann were tried successfully, many others would follow.

Bauer also knew, however, that there was no chance of German authorities doing the necessary. So he went instead to Mossad, the Israeli intelligence service, and asked for their help. That was treason, of course, except that in Bauer’s eyes, it was treason for the greater good. His condition was that, if Eichmann could be extracted from Buenos Aires, Israel would later extradite him to Germany.

Filmed as a pacy thriller, The People vs Fritz Bauer shows how he plotted with Mossad abroad while protecting his own back at home. I won’t bother with the usual plot spoiler warnings, because it’s a matter of record that Eichmann never returned to Germany.

Mossad got their man all right, but no application for extradition was ever received. The German government didn’t want him. He was instead tried and hanged in Israel, in 1962.

Frustrated again then, Bauer had his moment not long afterwards when initiating the Frankfurt Auschwitz trials of 1963. But he died in 1968, at least a decade too soon to see the cathartic effect his work had on a new generation of Germans determined to atone for the sins of their fathers.

The event included a live interview with director Lars Kraume, who offered fascinating and funny insights into the making of a film like this with little money. One of his big challenges, for example, was negotiating image rights for the “Le Corbusier wallpaper” that had famously (and unfortunately) bedecked Bauer’s office in old press photographs.

The plane was very hard on fuel, alas, so on Kraume’s budget, he couldn’t afford to turn the engines on. At the risk of betraying the magic of cinema, he explained that in one supposedly mid-air scene, two assistants lurked unseen behind the hero, shaking the seats.