Stop All the Clocks – Frank McNally on the influence of George Orwell’s first wife, Eileen O’Shaughnessy, on 1984 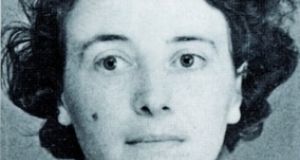 Eileen O’Shaughnessy, George Orwell’s first wife. In 1934, the year before the couple met, she had published a poem called “1984”

If ­it made a villain of the sinister “O’Brien”, as we noted here on Saturday (Diary, June 8th), George Orwell’s 1984 might also have added to the fame of another Irish surname, O’Shaughnessy, and for more benign reasons.

Alas it hasn’t – much – although the O’Shaughnessy in question, Orwell’s first wife Eileen, is at least a little better known today than she was during her lifetime. We now know, for example, that in 1934, the year before the couple met, she had published a poem called “1984”.

That was to mark the 50th anniversary of her old school in Sunderland. But being by now an Oxford English graduate, who had just read Huxley’s Brave New World, she used the occasion to project forward towards the school’s centenary and, in three sonnet-length verses, imagine the world as it might become.

Unfortunately, she did not herself live to see 1984, nor even 1948, the year Orwell wrote most of his dystopian classic. During a hysterectomy operation in late March 1945, she suffered an adverse reaction to the anaesthetic and died on the operating table, aged 39.

Her last letter to him, unfinished as the drug took effect, described the view from her hospital bed, ending with the words: “I also see a fire & the clock…” Thus it may have been by something more than coincidence that, along with echoing her poem title, Orwell began his 1984 with the ominous sentence: “It was a bright cold day in April, and the clocks were striking thirteen…”

Descended from a family which emigrated to Britain in the early 1800s, the Eileen who had met Orwell in 1935 was described variously as having a “heart-shaped face”, “Irish colouring” and a sense of “playfulness” that some English people found disconcerting. But despite being by her own account “rather drunk [and] very rowdy” during their first meeting, she made a deep impression on the writer. He told a friend immediately afterwards: “Now that is the kind of girl I would like to marry.” And marry they did, within months, although some questioned her wisdom in becoming part of Orwell’s bohemian life. Even her mother-in-law warned: “You are taking on something!”

Taking him on, at least in conversation, was something for which Eileen became noted. This may have been a necessary astringent on Orwell, a man who had an opinion about everything.

A mutual friend recalled that over breakfast once, he declared it the right of everyone in England to keep a pig and cure their own bacon, but claimed that industrial producers (“Big Bacon” as we might call them now – is that another legacy of Big Brother?) had prevented this by lobbying for stricter sanitary regulations.

When Eileen demanded evidence for this conspiracy theory, and he admitted having none, she likened him to an “irresponsible journalist”. He took this and similar chastenings well.

Much as she may have loved him, meanwhile, Orwell had a strong rival for his wife’s affections. This was her brother Laurence: a brilliant thoracic surgeon who, before his own untimely demise, carried out pioneering research into heart disease and tuberculosis. They were so close, she wrote, that if they had been at opposite ends of the world and she telegrammed “Come at once”, Laurence would do just that. Unlike Orwell, she added: “For him work comes before everything.”

It came as a dire blow to Eileen when her beloved brother died at Dunkirk in 1940. He had volunteered with the British army’s medical corps and was dealing with chest injuries among those retreating from the Germans when himself killed by an explosion.

His death sent Eileen into a depression that lasted 18 months. Among other things, the tragedy almost certainly shortened her husband’s life too. A consultant at one of the main TB research centres, Laurence O’Shaughnessy, had been among Britain’s leading experts into the disease that would kill Orwell at 46.

Orwell was in turn left distraught by Eileen’s death. Even by the standards of men of his generation, he was not usually given to displays of emotion. But one of his closest friends, fellow writer Inez Holden, was shocked at his physical and mental state when returning for the funeral (he had been working as a war correspondent).

He took comfort from the fact that Eileen’s last letter showed no signs of fear or pain. “The only consolation,” he wrote on 1st April 1945, “is that I don’t think she suffered…” The funeral took place on the 3rd. And it may or may not be a coincidence that, in 1984, the “bright cold day in April” was the 4th.