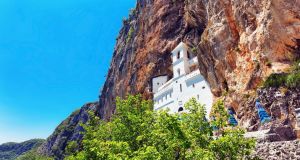 The monastery of Ostrog in Montenegro

In her epic book on Yugoslavia between the wars, all 1,200 pages of which I brought on a recent road-trip in those parts, Rebecca West discusses one of the Balkans’ lesser-known political assassinations with a Serbian poet.

Croats had blamed Serbs, he said, but the gunman was a “mad Montenegrin deputy”, accused of corruption. “The Montenegrins are a Homeric people, they do not understand modern life,” he explained: “They think that if a man attacks your honour, you kill him and [all] is well.”

This is a running theme in the book. Later, West learns that centuries of successfully repelling the Turks had made Montenegrins a warrior race, cut out to be heroes, but not for nine-to-five jobs. This made it “very difficult for them to fit in” with 1930s Yugoslavia.

Not that they weren’t trying. At one hotel she stayed in, West noted almost approvingly that they “tried to overcharge us”.  Alas, the hotel had insufficient experience of the world and “its efforts were scarcely perceptible”.

Much has changed since then. Montenegro is described these days as being in “late transition to a market economy”. It has even adopted the euro. And while prices remain low, there is some evidence of attempts to catch up.

Stopping for a night in the city of Niksic last month, we had family dinner in a hotel.  The hotel was modest, and so were most menu prices. Pasta dishes (all excellent) were €6, for example. The exception was fresh fish, which averaged €35 per person.

This I considered much too expensive. But that was before encountering the waiter: an austere man of about 60 who definitely had something Homeric about him.

His lack of English was almost total, but he used the few words he had, including “wild fish”, “special”, and “for two people”, with a force of personality hard to resist. By the time he remembered another description of the fish – “the best!” – it was clear we were having it.

He then disappeared into the kitchen briefly, before returning with more details of the project. They were mostly unintelligible, except for some figures he scribbled out, the key one of which seemed to be “74”. Guessing that was the price per kilo, I nodded assent.

Twenty minutes later, he came back only to dispense napkins – formally with tongs.  And another 20 minutes elapsed before his next appearance, still unaccompanied by food.

We were wondering now about the significance of the term “wild”. Were they still trying to catch the fish? But after a full hour, he presented the baked specimen, deboning it in our presence and leaving us the head on a separate platter.

The head stared at us throughout dinner, also looking Homeric, especially when the bill came. Then it dared us to say to its face that its life had not been worth it.  For the “74” proved to be the actual price: an astonishingly large proportion of a total for five people that came to just over €100. It was lovely fish.  But for €74 I’d have expected the salmon of knowledge.

Oh well. Among her other notable experiences in Montenegro, Rebecca West was led up a mountain path one evening by a guide who got lost but wouldn’t admit it. At length, with night falling, he identified a way down, which by West’s description was a narrow shelf, only inches wide, “along a cliff face”.

She refused to go, resulting in a tense stand-off, until the guide relented and found another way. And as the Serb poet explained later, the cliff would probably have killed them. But, crucially for the Montenegrin, that would have saved his honour.

We stayed in Niksic, by the way, as a base to visit Ostrog Monastery, a pilgrimage site built into a cliff in the nearby mountains.

And no, we didn’t risk the local guides. But even the drive along the approach road was scary. Then that gave way to a series of steep hairpin bends, so that we were relieved to reach a carpark from where there was a pedestrian trail the rest of the way.

Many locals do this part barefoot, as on Croagh Patrick. But I also noticed the progress of a trend West recorded in the 1930s.

Even then, she regretted the number of cars – mostly wrecks – defiling Montenegro’s beautiful countryside.

The cars are better now. But clambering towards the monastery, we periodically crossed even more tarmacked hairpins, on which SUVs were chugging along.

And it was with a mixture of astonishment and depression that I realised, far from climbing barefoot, many visitors just drive to the top.