Worldcon mad: a collision between science fiction and Flann O’Brien

Important principles from the catechism of cliché and a parallel development 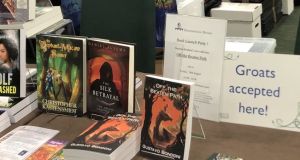 ‘I found myself among the speakers on a panel at Worldcon 2019, an extraordinary event that has brought thousands of sci-fi enthusiasts to Ireland from all over the world’.

In a parallel universe, I may be an avid reader of science fiction. In this one, the genre has almost entirely eluded me. And yet on Thursday, through some warp in the space-time continuum, I found myself among the speakers on a panel at Worldcon 2019, an extraordinary event that has brought thousands of sci-fi enthusiasts to Ireland from all over the world.  If you see any strange-looking people wandering around Dublin this weekend, it’s them.

The subject of the panel was Flann O’Brien, formerly of this parish, whose work would not normally be described as science fiction, although it appears to have formed a bridge to that community. Crucial to this is his novel The Third Policeman, which revolves around the work of a mad scientist.  Among other things, it inspired part of the cult 2005 TV series, Lost, through which many of the world’s sci-fi enthusiasts first heard of its author.

In the meantime, more recently, I started a journey in the opposite direction.  At a conference on Flann a few years ago, a speaker from the University of London gave a fascinating talk on the similarities between The Third Policeman and a 1960s sci-fi classic, Ubik, by Philip K Dick.

The event was memorable in part because it was the first time I had ever heard anyone use the literary adjective “Dickian”.  But it also set me to reading Ubik.  And sure enough, the similarities with TTP are striking.  Both books hinge on a bomb explosion.  Both involve a mysterious but all-powerful substance; and in both, the question gradually arises of whether the main characters are alive or dead.

In all other respects, they are very different novels. Dick was a Chicago-born Californian, whose wildly imaginative work was at least partly fuelled by a diet of mind-altering drugs, including amphetamines, LSD, and speed.  By contrast, drink aside, if there was any mind-altering substance involved in the making of TTP, it can only have been the turf-infused air of Co Offaly, where O’Brien spent a formative part of his childhood and which inspired his vision of hell.

The thematic similarities between TTP and Ubik are all the more interesting because the books appeared in quick succession. Although written in 1940, TTP was not published until 1967. Ubik came out in 1969. And yet there is no suggestion Dick even knew of the other book’s existence, never mind borrowed from it.  The similarities appear to be another example of that mysterious phenomenon: “parallel development”.

Anyway, it was a chance mention of my Ubik conversion to Worldcon 2019 impresario James Bacon that pitched me onto this week’s panel.  And if nothing else, the event proved how well Flann O’Brien’s work travels across international boundaries, even though his literary career was once thought of as an extended in-joke that only Irish people could get.

This was considered all the more true of the columns he wrote as Myles na gCopaleen. And the “Catechism of Cliché”, for example, by which he interrogated the petrified language of Irish public life, as reported in 1940s newspapers, might seem to depend on at least some familiarity with 20th-century Ireland.

A typical example, inspired by county council meetings, includes the following: Q. What does pandemonium do? A. It breaks loose. Q. Describe its subsequent dominion. A. It reigns. Q. How are allegations dealt with? A. They are denied. Q. Yes, but […] come now, how are they denied? A. Hotly. Q. What is the mean temperature of an altercation, therefore? A. Heated.” And so on. Yet when two of my fellow panellists read that whole piece at Worldcon, it caused great hilarity among a mostly American audience, many of them reared on Dickiana.

Then again, this reminded me of a chance discovery I made some years ago while reading old New Yorker columns, some of them by a humourist called Frank Sullivan. His stock characters included a Mr Arbuthnot, “cliché expert” who is called to testify on various subjects, eg: Q: What happens to the victim just before the crime? A. He is last seen alive. Q: What does the accused show? A. No sign of emotion. Etc.

Myles’s Catechism first appeared in 1942, whereas Mr Arbuthnot had been testifying for several years before that.  So was this also parallel development? I’m not sure, but I have recently tracked down a fuller anthology of Sullivan’s work and am now investigating further.

What is too early to do at this stage of the inquiry? Say. What am I keeping in the meantime? An open mind. In which directions am I not ruling anything?  In or out.