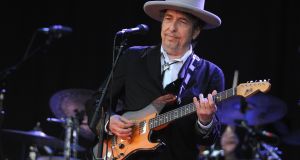 The village of Ballinalee, little touristed, would surely welcome being put on the map by Bob Dylan. Photograph: Fred Tanneau/AFP/GettyImages

Only last weekend here I was mentioning the “Battle of the Books” (circa 561 AD), a conflict of ancient Ireland said to have arisen from a landmark judgment in a copyright dispute: “To every cow her calf, to every book its copy.”

Little did I realise then that calves were also implicit in a developing row in modern Ireland, to which a famous scribe is again central. In 561 it was St Colmcille. Now it’s Bob Dylan.

The question at issue is whether, in his latest song – I contain Multitudes – Dylan is making deliberate reference to the village of Ballinalee, in Co Longford, or whether he meant Ballylee, in Co Galway, instead. He certainly pronounces it as the former. “Follow me close, I’m going to Bally-na-lee/I’ll lose my mind if you don’t come with me,” he sings.

But the doubt arises because Dylanologists believe the song is consciously echoing an old love poem by Antoine Ó Raifteirí (1779-1835). And that was set in Ballylee, part of Lady’s Gregory’s Kiltartan country, which it also mentions.

Gaeilgeoirí will know that the only difference between the two anglicised names is a small vesitage of Irish grammar.

They mean much the same thing, both being places of calves.

The Galway hamlet was originally Baile Uí Laoigh, with the middle syllable disappearing in English. The Longford village was Béal Ath Na Laoigh (“Mouth of the Ford of the Calves”), so the syllable survived. If the song row escalates, it may become known as the Battle of the Definite Article.

The village of Ballinalee, little touristed, would surely welcome being put on the map by Dylan. Some might argue it was on the map already, via such local celebrities as Sean MacEoin, who gave it a battle of its own during the War of Independence.

But the place in Galway is somewhat better known, courtesy of WB Yeats and his Thoor Ballylee. That was the setting for his epic poem, Meditations in Time of Civil War, wherein, as my school notes put it, he imagines the “clanging wings and terrible vengeance of the Furies”.

He meant the Furies from Greek mythology, of course, not the well-known music family. But that reminds me, getting back to Dylan, that he once incurred the wrath of the Behans – a fearsome tribe from Dublin mythology – for supposedly turning The Patriot Game (Dominic Behan’s song about a Monaghan IRA man) into With God on Our Side.

Of this latest controversy, I would suspect Dylan used “Ballinalee” just because it better suited his metre. He has notorious form in that regard. Witness the extra syllable forced by shotgun into a line from Forever Young: “May you have a strong foundation/When the winds of changes (ouch!) shift”.

But the strange thing is, for his latest song, Ballylee would have scanned better.

I suggested earlier that Ballylee is in “Co Galway”, which is true. But like Oranmore, in another old ballad, it’s also in “the” Co Galway.  This is because, as Bob Dylan may or may not know, we have a tendency in this country to insert the definite article in places where it doesn’t necessarily belong.

In his Dictionary of Hiberno-English, Terry Dolan credits this to the lingering influence of Irish, which has no indefinite article. Hence, he suggests, our habit of referring to “the Christmas” or “the arthritis”. Sometimes we also use it in place of “my”, as in “the grandfather”. And then there was the old Gaelic aristocratic usage, eg “The O’Neill”.

Now, in one respect at least, the habit may have crossed the Irish Sea. The London Times columnist and former MP Matthew Parris was complaining this week about the tendency of Britain’s current political leaders to say that, when making decisions about coronavirus, they would themselves led by something called “the science”.

This was not just an unconscious habit, he thought. By saying “the science”, rather than “science”, they were elevating it to a position of unquestioned authority, like “the law” or “the Church”. This allowed them to hide behind it, he argued, abdicating responsibility for painful political choices.

I don’t know. Maybe it is an unconscious habit. Maybe they caught it from us during the Brexit talks.

But yes, the usage does somehow lend itself to expressions of fatalism, especially in health matters.

Even the typical Irish question “how did you get over the Christmas?” makes that event sound like a medical condition. And then there’s the other example Dolan cites, from Angela’s Ashes: “Of course you’re bound to have the cough when you live in Limerick because this is the capital city of the weak chest and the weak chest leads to the consumption.”

1 David McWilliams: ‘Ireland is three decisions away from being a perfect country’
2 Mandatory quarantine and flight cancellations unlikely despite rise in cases
3 California shuts down again as US coronavirus cases surge
4 My aunt never told us that Gran passed away with no will
5 Game Changers: Gary O’Toole took a stand when others turned their heads
Real news has value SUBSCRIBE