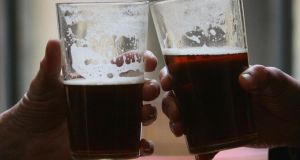 “The St Patrick’s Anti-Treating League, a movement aimed not at making its members teetotal, but only at getting them to forswear the habit of buying or accepting rounds of drink.” Photograph: Matt Cardy/Getty Images

Temperance campaigners from a century ago could hardly have imagined the Ireland of April 2020, with its closed pubs and its many alcohol manufacturers diversifying into the production of hand sanitiser.

But in one way, at least, they foreshadowed our struggles against coronavirus. Because, pending the ultimate destruction of their enemy – drunkenness – they concentrated for a while on the more realistic ambition, that of flattening the curve. Or the circle, as it was in that case – the one better known in Ireland as “the round system”.

Then, as recently, this was a staple of Irish social life. And temperance campaigners had come to regard it as an evil worse than alcohol itself.

They lamented that, motivated by feelings of honour or generosity, or more often than not just by the fear of looking mean, the Irish drank far more together than they would if buying only for themselves.

Hence the foundation, on April 20th, 1902, of the St Patrick’s Anti-Treating League, a movement aimed not at making its members teetotal, but only at getting them to forswear the habit of buying or accepting rounds of drink. As with the Pioneer Association, established a few years earlier, affiliation to this new movement would be advertised with a lapel pin.

In another parallel with the battle against Covid-19, one of the clergymen who backed the scheme described the problem of round-buying in mathematical terms, much as we do now when talking about virus reproduction rates.

Left to himself, he explained, a farmer celebrating the sale of livestock at a fair might have “one measure” and go home. Joined by a neighbour, however, the two men would have at least “four measures” between them. If a third man joined the round, this would become nine measures, and so on in a square-number sequence, escalating rapidly into a pyramid scheme for publicans.

The aim of the ATL, as the clergyman didn’t add, was to reduce the infection rate to what we would now call RO = 1, or preferably -1.

And the tactic does seem to have to worked for a time.  Alas, Irish literature provides us with an early example of what the league was up against, because it was also founded just in time to be lampooned by James Joyce’s Ulysses, set in 1904.

Here’s the narrator of the scene from Barney Kiernan’s pub, as he scoffs about the man at the centre of the gathering: “So then the citizen begins talking about […] the shoneens that can’t speak their own language [and] about the Gaelic league and the antitreating league and drink, the curse of Ireland. Antitreating is about the size of it. Gob, he’d let you pour all manner of drink down his throat till the Lord would call him before you’d ever see the froth of his pint.”

In that and a million similar slanders muttered behind backs up and down the country, the ATL’s reputation would be gradually maligned as a refuge for the tight. In the meantime, it thrived for at least a decade.

During another fateful spring, in March 1916, a judge at the Galway assizes was moved to marvel at the decrease of crime in his and other districts and credited the league for the “wave of sobriety” sweeping the country.

But like all waves, including viral ones, that soon passed. In the pub version of the civil war, the Pro-Treating-ites must have won. By the 1920s, mentions of the ATL grow fewer and farther between in the archives.

The rise of “lounge bars”, bringing a more respectable form of drinking (and women, increasingly) helped kill it.

More fatal, in a country where the old Gaelic feudal concept of hospitality has never completely died out, was the association with meanness.

Curiously, in 1964, there was a short-lived campaign to revive the ATL, and even to legislate against round-buying. This was supported by, of all things, an Irish Times editorial, which complained about the expense the system forced on most people while also – in the best Irish tradition – lamenting the abuse of the custom by a stingy minority: “There are, of course, reprehensible types who do not ‘stand their round’ and resort to subterfuges to evade their social responsibilities. These are deplorable freaks . . .”

The attempted revival came to nothing. During subsequent waves of sobriety and inebriation, it has been left instead to evolving social behaviour to restrict the spread of round-buying, most typically by larger groups subdividing into more manageable units.

Although treating is not quite the scourge of Irish life it once was, the search for a vaccine continues.