Diarmaid Ferriter: Let’s not go back to economics as usual 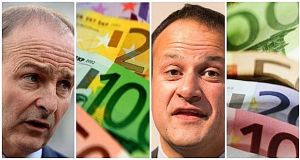 Crises can sharply hone the desire for a reordering of priorities.

Minister for Finance Paschal Donohoe was understandably keen to impart a positive message earlier this week in the midst of the bleak economic forecasts: in charting the way out of decline, he maintained, “we face into this journey from a position of strength”.

It seems a dubious assertion, not only because it fails to take account of pre-Covid-19 problems, but also because the future shape of our economy is so contingent on what happens externally. We may well look back on this period with a degree of relief that Ireland chose to respond to the public health challenge in its own way, but controlling the economic future, if we continue to follow our current economic model, is something else entirely.

Just five months ago the Fiscal Advisory Council acknowledged progress in bringing a large deficit to balance and debt ratios being reduced, but it suggested the macroeconomic outlook remained “unusually uncertain. Adverse risks include the possibility of global slowdown, further trade tensions, increased financial vulnerability or changes to the international tax environment”. It also pointed to Ireland’s still-high debt burden as well as over-reliance on surges in corporation tax receipts. Prior to the crisis various sectors were highlighting grave economic shortfalls, including in education; just three months ago, third-level institutions united to call for action to tackle the critical situation regarding education funding, pointing out that State funding per student was 40 per cent lower than a decade ago.

Is there any guarantee the global economy will be kept as broadly open as it was after the 2008-2009 crash?

It is assumed aggressive global trade will be vital to any recovery, but where will the balance lie after this crisis? Will it give rise to more protectionist instincts and export curtailments given the current resentments and practical supply issues and the pre-Covid-19 trade tensions the crisis might exacerbate? Is there any guarantee the global economy will be kept as broadly open as it was after the 2008-2009 crash?

It has been asserted the international economic challenge is the biggest since the second World War. One of the key issues in that postwar decade in Ireland was a reluctance to sufficiently alter the economic model then being followed. It took time for a reorientation to take root. With Paddy Lynch, Tom Barrington and other younger civil servants, TK Whitaker, secretary of the department of finance from 1956, pushed for a more rounded definition of economics to stress “borrowing was not a sin, if it contributed to permanent national improvement”. Listening to the advice of economists was something of a novelty in a country where, as Paddy Lynch asserted, “Irish political economy unfortunately sometimes tends to be more political than economic”.

Paddy Lynch questioned economic growth for its own sake if it contributed less to the common good than spending on health, education, housing and social security

Whitaker’s friendship with Charles Carter, who held the chair of applied economics at Queen’s University Belfast, generated another important intellectual collaboration; Carter was even more explicit than Whitaker in arguing for inward investment and an export-led strategy. Over the decades the pace of economic interconnectedness continued to evolve; by 2006, the National Competitive Council declared Ireland the most globalised country ever seen.

Interestingly, in 1953, Whitaker had criticised the department of finance’s “blind devotion to precedent”. That question of precedent is also relevant today, in the sense that it is deemed imperative to try and get things back to the way they were. But will such devotion to familiar models suffice and how will it give any meaning to talk and promises of a new social contract? In the 1960s Paddy Lynch questioned economic growth for its own sake if it contributed less to the common good than spending on health, education, housing and social security.

Crises can sharply hone the desire for a reordering of priorities. We have seen the transformative impact of massive State intervention in key areas and the importance of a welfare safety net, and we are likely to a have an updated version of the “Boston versus Berlin” debate in relation to tax and public service and the disparity between corporate profits and approaches to health, housing and climate change.

Paschal Donohoe has prided himself on being a “centrist”, acknowledging that “progressive taxation and social interventions make a difference”. He has also maintained in recent years that “our economic and political models are worth defending but are straining”. That seems like tiptoeing when new strides are needed. Take the issue of housing: Donohoe has remarked that the 1974 Kenny report, which proposed that local authorities be allowed compulsorily acquire development land at 25 per cent above its existing use value, was never implemented because “it would be an unprecedented intervention with property rights. Furthermore, it would have set the price of purchase, not through exchange or negotiation but by fiat.”

But that is what a housing emergency demands.

We do not need a new mantra centred on the idea of the best little economic recovery in the post-Covid-19 world; we need a new definition of economic decency and balance.