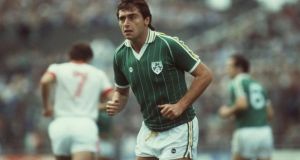 Reading the sad news of the footballer Michael Robinson’s death, I was surprised to realise that I had attended his debut international, in October 1980. This fact cannot have loomed large at the time given the event’s other distinctions, which included it being my first trip outside Ireland and the first time I saw Paris.

But I should also be able to say that I witnessed Robinson’s debut goal for his country, scored right in front of me. Alas, officially, I can’t.

What I did see was the culmination of a second-half fight-back in which Ireland, outclassed early on and trailing to a goal by Michel Platini, had begun to rattle the home team and their noisy supporters in the Parc des Princes.

Then Steve Heighway launched one of his trademark crosses into the goalmouth behind which most Irish supporters were interned. Kevin Moran got his head on it and the ball fell to Robinson, who swept it into the net. Cue an explosion of joy from the young and innocent among us.

But the older and hard-bitten knew better.

Their first reaction was to look at the referee and linesman, to see what new quasi-judicial outrage was about to be inflicted.

Sure enough, the goal was ruled out, either for alleged offside by Frank Stapleton or because of suspected handball by Moran, or just because we were Irish.

As veterans reminded us afterwards, the same thing had happened in Paris two years previously when we lost 2-0.

The French again accepted their reprieve, rallied, and scored a second to finish us off.

A year later, in Lansdowne Road, I would see Robinson score the winner in the return fixture. But that wasn’t quite enough to overturn the accumulated miscarriages of justice, as we failed to qualify for another World Cup.

The other statistics that stand out from that Paris trip is that it took us 27 hours to get there. Most of this was on a bus through England. We left Dublin on Sunday evening and it was nearing midnight Monday by the time we sighted the Eiffel Tower. All facilitated by a company euphemistically termed “Funtrek”.

But some of us were easily entertained then. As a teenager, still damp behind the ears, I found the whole experience enthralling.

In fact, I would nearly miss the time when Paris could be that remote, except that, with the current lockdown, it’s temporarily even more so.

On the subject of French nostalgia, by the way, I was disillusioned to read recently that Marcel Proust’s famous epiphany involving a madeleine was the subject or several rewrites, involving at least three different foods.

It seems he first experimented with using toast-and-honey as the catalyst. Then he considered a biscotto. Only on a third draft did he choose the little cake with the distinctive scallop-shell shape (a religious symbol originally, being the sign of St James and by extension of the great medieval pilgrimage to Spain).

Unabashed, Proust nevertheless prefaced the incident by a discussion of the “Celtic belief” that the souls of lost loved ones can be held captive in plants or animals or inanimate objects, trapped until the day we happen to encounter the object in question.

Then, as he wrote, “they start and tremble, they call us by their name, and as soon as we have recognised their voice the spell is broken.”

It’s a poetic idea, only partly ruined by the thought that he held auditions for the role of accidental spell-breaker.

I don’t remember any madeleines on my 1980 trip; they would have been doubly apt given the comparisons with a medieval pilgrimage.

But speaking of things that “start and tremble”, one of the triggers for my memories of early foreign travel will always be a sound – the shivering of bottles in the ferry duty-free every time the ship’s engines shuddered. It used to wake you several times on the night crossing to Liverpool, assuming you had managed to sleep in the Pullman seats.

Mind you, and more in keeping with Proust, there is also an aroma associated with that 1980 trip.

The memory has just been released again from some inanimate object around me – possibly this shirt I’ve been wearing for a day too long during lockdown.

But at the time it emanated from the stranger I had to sit beside on the bus. He had had a rough weekend, clearly, and slept most of the way. And not only was he my companion on the bus, but as single travellers, we were paired off to share a Paris hotel room.

Fortunately, his condition was nothing that couldn’t be fixed by a shower.