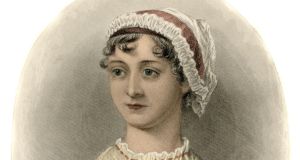 Jane Austen: impending bicentenary of her death will unleash a flood of commemorations

I did a double-take during the week when an email arrived inviting me to “celebrate the bicentennial of Jane Austen’s death at Hilton Park, Co Monaghan”.

My first reaction was: “Did Jane Austen really die at Hilton Park, Co Monaghan?” Then I read the rest of the heading, which indicated that the event in question was scheduled for a week from tomorrow. So it could hardly be her death that was planned, but rather the bicentennial, which is being commemorated by an open-air production of Pride and Prejudice.

Whatever about Monaghan, she might by a different twist of fate have died a few miles south of there, in Longford. That was the adopted home of Tom Lefroy, who as Austen fans will know, was the inspiration for Mr Darcy – the prejudiced half of the misunderstanding that, in the novel, complicated the protagonists’ romance.

In real life, it seems to have been Lefroy’s aunt Anne who thwarted his relationship with the writer, although she had also unwittingly started it.

Living in Hampshire and a friend of the Austens, she invited her nephew from Ireland – a young law student then – to stay for Christmas 1795. He met Jane at a ball, and things quickly escalated.

For Austen’s part, the affair was book-ended by two quotations, both in letters to a sister.

In the first, she struggles to contain her excitement: “I am almost afraid to tell you how my Irish friend and I behave. Imagine to yourself anything more profligate in the way of dancing and sitting down together.”

In the second, she is inconsolable, even as she looks forward to another ball: “At length the day is come on which I am to flirt my last with Tom Lefroy, and when you receive this it will be all over.  My tears flow as I write . . . ”

The path of true love had run into, among other things, Aunt Anne, who foresaw youthful passion giving way to mutual penury if the couple wed. So she sent him home instead.

And thus Jane Austen was never to know the joys of the great Irish marriage proposal, “How would you like to be buried with my people?”, or whatever variation Lefroy might have used.

On the plus side, she channelled her disappointment into literature – starting work on Pride and Prejudice in late 1796, with a romantic hero whose surname was French-Irish, like her Huguenot friend’s.

As for pride, that word features in the last and only other reference to Lefroy in Austen’s surviving letters. It came two years later, when the same aunt visited, but she and Jane avoided mentioning the elephant in the room: “I was too proud to make any inquiries,” she wrote of their conversation, “but on my father’s afterwards asking where he was, I learnt that he was gone back to London in (sic) his way to Ireland, where he is called to the bar and means to practise.”

He did indeed practise, hard enough to become a judge and later chief justice of Ireland, although another celebrity lawyer of his time, Daniel O’Connell, was openly sceptical as to whether merit alone, as opposed to Protestantism, had recommended him.

In any case, Lefroy opposed Catholic Emancipation, a prejudice no doubt influenced by inherited memories from France, where the shoe had been on the other foot.

A miniature portrait of the young man Austen fell for compares well with the Darcy of the book, or any of the actors who have played him since.

But Lefroy then had the misfortune, for a former Adonis, to live a very long life, twice the 41 years allotted to Austen, and another decade besides.

His great age eventually became the subject of satire, partly because he continued to serve as chief justice until 90.

As long as he lived, however, he never quite forgot Jane. He had long since married, unlike her.

But when questioned about it late in life, he admitted to having loved her, albeit that it was a “boyish” thing.

Austen died on July 18th, 1817, and the impending bicentenary will unleash a flood of commemorations. As for the one mentioned earlier, it takes place on Sunday 23rd in the suitably 18th-century surrounds of a stately home near Clones.

And it promises to be almost as decadent as the flirtation described in Jane’s letters. True, there is no dancing planned, just a Chapterhouse Theatre Company staging of the novel, on the front lawn.

But there will be (gasp!) “sitting down together”, plus a food and wine bar. More details of the debauchery are at hiltonpark.ie

1 Coronavirus: Death rate from Covid-19 in Ireland rises to 2.4%
2 Netflix: 10 of the best new shows and films to watch in April
3 Coronavirus in Ireland: New powers of arrest for gardaí expected to come into force
4 ‘On the bike I meet no one’: 78-year-old cyclist refuses to cocoon
5 Coronavirus: Journal Media to cut pay by up to 20 per cent
Real news has value SUBSCRIBE