Media excluded from trial of Ahed Tamimi, who has become icon for Palestinian struggle 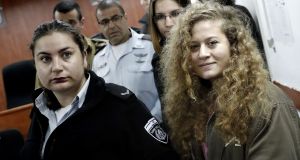 Ahed Tamimi (17) arrives for the beginning of her trial in the Israeli military court at Ofer military prison in the West Bank village of Betunia on Tuesday. Photograph: Thomas Coex/AFP/Getty Images

Ahed Tamimi, the Palestinian teenager filmed kicking and slapping Israeli soldiers in the West Bank, went on trial on Tuesday in an Israeli military court.

The judge ordered the proceedings to be held behind closed doors and journalists were removed from the Ofer military base near Ramallah, despite a request by the defence lawyer for the media to be allowed to observe proceedings.

“They understand that people are interested in Ahed’s case, they understand that her rights are being infringed on and her trial is something that shouldn’t be happening,” lawyer Gaby Lasky said. “So the way to keep it out of everybody’s eyes is to close doors and not allow people inside the court for her hearing,” she said.

Ms Tamimi, who turned 17 while in detention, has become an icon for the Palestinian struggle against Israel’s occupation of the West Bank. Posters of the blue-eyed teenager with distinctive long, curly blonde hair, appear across the West Bank and more than 1.7 million people have signed an online petition calling for her release.

She is charged with 12 offences, including assaulting security forces and incitement to violence and faces a lengthy jail term.

A few days later, Ms Tamimi was arrested in a night-time raid and has since been denied bail.

She claimed she slapped the soldiers in the December 15th incident because she had just found out that Israeli troops had seriously wounded a 15-year-old cousin, shooting him in the head from close range with a rubber bullet during stone-throwing clashes.

Ms Tamimi’s father, Bassem, said he arrived at the trial “with no good expectations, because this a military court, and it’s part of the Israeli military occupation”.

Amnesty International called on Israel to immediately release Ms Tamimi, saying “the arrest of a child must be used only as a last resort and for the shortest appropriate period of time”.

Many in Israel called Ms Tamimi a “troublemaker” or even a “terrorist” and there was a fierce debate over the reaction of the soldiers, with some praising their “restraint” and others arguing that such a response undermined Israeli deterrence.

“She is not a little girl, she is a terrorist,” said culture minister Miri Regev. “It’s about time they will understand that people like her have to be in jail and not be allowed to incite.”

The incident prompted another maelstrom a few weeks ago when leading Israeli poet and songwriter Yehonatan Geffen made a comparison between Ms Tamimi and Anne Frank.

After public outrage, Mr Geffen eventually apologised but said he was trying to show that just like Israel has national heroes, so do the Palestinians.