Macron offers hospitals and phones to Corsica – but no autonomy 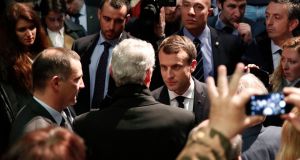 French president Emmanuel Macron talks to the president of the Corsican executive council, Gilles Simeoni, after his speech at the Alb’Oru cultural centre in Bastia, Corsica. Photograph: Benoit Tessier

Corsican nationalist leaders sat stoney-faced in the front row of the cultural centre in Bastia while French president Emmanuel Macron delivered his speech on the future of the troubled Mediterranean island on Wednesday afternoon.

Earlier in the day, the nationalists boycotted the “Republican lunch” to which Mr Macron invited them, “because of the tone yesterday, which was fairly violent”, Jean-Félix Acquaviva, a deputy in the Corsican assembly, explained.

Neither Mr Macron, Gilles Simeoni nor Jean-Guy Talamoni, the president of the island’s territorial executive and speaker of the Corsican assembly, commented on their tense, two-hour meeting on Tuesday night.

The nationalists won 56 per cent of the vote in regional elections in December, and they now hold 41 of 63 seats in the Corsican assembly.

During his two-day trip, Mr Macron rejected four of five of the nationalists’ demands. On Tuesday, he refused amnesty for Corsican “political prisoners” on the mainland. On Wednesday, he rejected special resident’s status for long-term inhabitants of the island. Corsica cannot keep the taxes it raises, he said. Nor can there be official status for the Corsican language. Mr Macron’s only concession was to agree to mention Corsica in the French constitution.

The French president began by saying that Corsica “is at the heart of the republic” and calling for its “fulfilment” and “emancipation”. He evoked its French history, from Napoleon through to the second World War, when it was “the first piece of France liberated in 1943”.

Mr Macron evoked the “daily difficulties” endured by the Corsican people, starting with a high crime rate. He promised more police, and “zero tolerance” for drug-traffickers. In an allusion to nationalist violence, he said that “nothing will be possible if violence and insecurity continue . . . This violence, whether of terrorist or common law origin . . . must disappear.”

Mr Macron promised mobile phone coverage for all of Corsica by 2020, and 38,000 more telephone lines in the two largest cities, Bastia and Ajaccio. The state would improve care for the elderly, modernise the hospital in Bastia and invest more in infrastructure throughout the island.

Mr Macron finally turned to the issues that have inflamed nationalists, addressing their demand for a “resident’s status” to prevent buyers from the mainland driving up property prices by purchasing holiday homes. “Resident’s status is the wrong answer” to the housing shortage, Mr Macron said. “It would be contrary to our constitution and to European law.”

Mr Macron said he was aware of demands for reform of the island’s tax regime. “But we must be lucid. The more taxation is transferred to Corsica, the less the state will give her.”

The Corsican language “is present in the hearts and daily lives of Corsicans”, Mr Macron said, noting the state spends €9 million annually promoting its preservation. But, he added, “bilingualism is not the same thing as co-official status . . . The legitimate defence of the Corsican language cannot exclude others. There is one official language, and that is French.”

Mr Macron chose to interpret nationalists’ demand for mention in the constitution as “the expression of a legitimate need for recognition by the Republic”. But he advocated an addition to article 72 of the constitution, regarding the definition of the “territorial units of the Republic”. The nationalists wanted Corsica to be listed as an “overseas territory” under article 74.

The confrontation between Mr Macron’s attachment to a strong central state and the nationalists’ aspirations was symbolised by a tug of war over flags. The nationalists usually do not show the French tricolour at the headquarters of the territorial executive, but relented for Mr Macron’s visit on the grounds that they would fly the flag of any visiting leader.

Ten French and European flags flanked Mr Macron during his speech in Bastia on Wednesday. The black-and-white Corsican emblem was nowhere to be seen.