Venezuela: Uprising failure will be of limited relief to Maduro 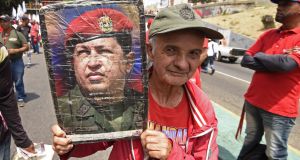 A supporter of Venezuelan president Nicolas Maduro displays a picture of late leader Hugo Chavez during a rally on May Day in Caracas. Photograph: Juan Barreto/AFP/Getty Images

The fact that the day after President Nicolás Maduro accused him of attempting a coup, Venezuela’s opposition leader, Juan Guaidó, could lead a mass May Day rally in the capital, Caracas, illustrates the extent of the political chaos in the South American country.

Though Maduro has promised there would be no impunity for Tuesday’s events, in which Guaidó announced the start of a military uprising only to see it fizzle out after a day of clashes, he has so far not moved to carry out his threat.

Although leaving Guaidó at liberty risks making him look weak to his own Chavista hardliners, Maduro must calculate that detaining him could provoke the US and other regional governments into a more aggressive stance against his increasingly embattled dictatorship.

It is still unclear exactly what happened on Tuesday. Claim and counter-claim have been made, and various theories circulate. One is that Guaidó was rushed into an improvised civic-military uprising, perhaps to avoid the threat of imminent arrest three months after he declared himself president in a bid to topple Maduro.

But if Tuesday did in fact constitute a more carefully planned military uprising that somehow went wrong or was betrayed, its failure will bring only a limited amount of relief to the Maduro regime.

Over the course of modern Latin American history many such military movements, against both dictatorships and democracies, were unsuccessful. But they helped chip away at a government’s authority until, in many cases after a series of apparently hapless efforts, one of them succeeded.

The other strategy relies on old-fashioned repression. Chavismo has already snuffed out several attempts from within the armed forces to topple it. But it must do so every time one of these takes place. Fail once and its leaders could face exile, jail or worse.

This reality helps explain the paranoia that is a constant feature of reports that leak out from inside the heart of the regime. So the likeliest outcome of this week’s events is an intensification of political repression. Many of the hundreds of political prisoners currently in jail in Venezuela are members of the security forces, and the Venezuelan military is believed to be one of the most spied-upon institutions on the continent – but by its own political masters as opposed to any foreign power.

This dual-track strategy for ensuring the loyalty of one of its last supports is high-risk for an already discredited regime. Maduro may have faced down the latest challenge to his authority but there are likely be more.