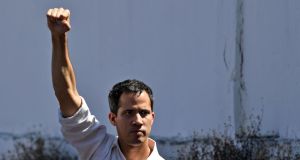 Juan Guaido: ‘No one wants to live like this, whatever their politics: people going five or six months without running water in their houses; without medicines; without enough money to buy food.’ Photograph: Yuri Cortez/AFP/Getty

If Juan Guaidó is worried about a Venezuelan government crackdown, state-sponsored thuggery or even jail and exile as suffered by many of his peers, the youthful opposition leader does not show it.

The newly elected head of the country’s National Assembly, or Congress, wants to redouble opposition efforts to end what he and most of the world calls the “dictatorship” of president Nicolás Maduro.

“No one wants to live like this, whatever their politics: people going five or six months without running water in their houses; without medicines; without enough money to buy food,” the 35-year-old congressman said in Caracas.

Dressed in a dark business suit, and sitting in his new office in the gold-domed National Assembly building, Guaidó says the opposition has a clear road map for “an end to the usurpation of power [by Maduro] and a transitional government leading to free elections”.

That is easier said than done. Maduro was last week sworn in for a second six-year presidential term that about 50 nations view as illegitimate after fraudulent elections last year.

Sebastián Piñera, Chile’s president, agreed: “Chile does not recognise the regime of Nicolás Maduro... We give our full support to the National Assembly... and its new head Juan Guaidó.”

The United States, EU and Brazil issued similar statements calling for a transition to democratic rule.

But Maduro shows no sign of yielding. As Venezuela’s social and political crises have deepened, the economy has imploded and millions of desperate people have fled the country. Yet the government, which is supported by the military and controls food supplies, has simply dug in.

Guaidó began his mandate last week, issuing an eight-point action plan to confront Maduro. It includes symbolic measures and some tangible ones, including a call to set up a fund outside the country where the confiscated proceeds of Venezuelan corruption can be held until there is a change of government.

But unless the military rebels against Maduro, or his government is torn apart by internal ructions, there are few concrete actions that the disorganised opposition can take to encourage a transition, analysts caution.

“It is easy for the opposition to speak vaguely about its demands for Maduro to leave power,” said Luis Vicente León, head of Venezuelan pollster Datanálisis. “The hard part is uniting around a real strategy, a plan of action, single leadership.”

Guaidó insists the opposition is unified.

“It’s not perfect but we’re all committed to keep applying the pressure necessary to bring about a change, “ he said.

“Nicolás Maduro is not going to have an epiphany and accept he should step aside... But there is an opportunity for change and there are clear signs of defections from within Chavismo,” referring to the socialist movement founded by Maduro’s predecessor, the late Hugo Chávez.

The defection last week to the US of Christian Zerpa, a high-profile judge and once a loyal regime supporter, is the latest sign of such cracks in the ruling elite.

Julio Borges, an opposition leader now in exile, says there were at least six coup attempts last year and that dozens of rebellious members of the armed forces have been imprisoned.

Once-loyal Chavistas, such as former ministers Elías Jaua and José Vicente Rangel, are increasingly critical. According to a report in the Washington Post, defence minister Vladimir Padrino López even told Maduro to resign last month and said he would do so himself if the president refused.

As the grandson of a Bolivarian Guard sergeant and a Venezuelan navy captain, Guaidó knows the importance of the military in resolving the crisis.

Michael Penfold, professor of political economy and governance at the IESA, a business school in Caracas, said that Venezuela was so fragile “that if Maduro enters a real crisis, the military may not have to intervene to provoke change. A simple statement might be enough to tip the balance.”

The armed forces said in a statement on Thursday that it “reaffirmed its absolute loyalty... to Maduro.”

That the National Assembly is the only democratically elected institution left in the country means it will be key to any eventual political settlement. It is also why Maduro may seek to close it.

Just across the corridor from it is the rival Constituent Assembly, which Maduro set up in 2017 to rubber-stamp his measures, kicking off months of protests in which at least 125 people died.

“The National Assembly has to lie at the heart of any solution,” said Phil Gunson, Venezuela analyst at the Crisis Group. “But there’s a very real threat the government may move to dissolve it.”

If that happened, there would be international outrage.

“When we started protesting in 2014, people elsewhere in the world didn’t understand us and didn’t believe us. Foreign embassies wouldn’t receive us,” recalled Lilian Tintori, wife of opposition leader Leopoldo López, who remains under house arrest in Caracas.

“But little by little we’ve been knocking on doors and making our case so that now, most of the whole world supports us. And they don’t recognise Maduro.” – Copyright The Financial Times Limited 2019

Trump threatens to withhold funds from ‘China-centric’ WHO 06:34
Trump says economy ready to go ‘like a rocketship’ as deaths climb 21:59
Coronavirus: France is fourth country to register more than 10,000 deaths 20:16
Boris Johnson in stable condition as UK records biggest daily death toll 19:03
Coronavirus: Sweden to enact crisis powers but hold them in reserve 18:57