Fifteen killed as plane crashes into residential housing in Iran

Crew believed to have mistaken one airport for another, aviation official claims 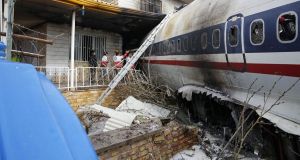 A Boeing 707 cargo plane that crashed into a residential complex near the Iranian capital Tehran. Photograph: Hasan Shirvani/AFP/Getty Images

A decades-old Iranian Boeing 707 military cargo plane has crashed while trying to land west of Iran’s capital, killing 15 people on board and leaving a sole survivor, authorities said.

The crash of the jetliner marks the latest aviation disaster for Iran, which hoped to replace its ageing fleet under the terms of the 2015 nuclear deal with world powers.

US president Donald Trump’s withdrawal from the accord in May scuttled billions of dollars in planned sales by Airbus and Boeing to the Islamic Republic, only increasing the danger for passengers in Iranian planes.

The aircraft, which bore the paint scheme of the Iranian air force’s Saha civilian airline, was making an emergency landing at around 8.30am local time at Fath Airport, an airfield controlled by Iran’s powerful paramilitary Revolutionary Guard.

The plane skidded off the runway, crashed through a perimeter fence and into a residential neighbourhood.

Iranian state television aired images of smoke-charred homes and the fuselage of the aircraft lying on the ground in the neighbourhood.

The plane was meant to land at the nearby Payam International Airport, about 40km (25 miles) west of Tehran, the Iranian capital.

Authorities did not immediately offer a reason for the crew’s decision to land instead at Fath Airport.

In November, a commercial airline reportedly mistook Fath for Payam, but was able to abort its landing.

Pirhossein Koulivand, the head of the country’s emergency medical services, said that of the 16 people on board the plane, only the flight engineer was known to have survived.

IRNA reported all 15 bodies of the crew who died had been recovered by Monday afternoon.

Iran’s air force said in a statement that the fate of the crew, including their possible “martyrdom”, is under investigation.

It was not immediately clear who owns the plane, though army spokesman Gen Shahin Taghikhani told state TV that the plane and its crew were Iranian.

Iranians often use the word “martyrdom” for those who die in war or national service.

The plane was reportedly carrying a cargo of meat from Bishkek, Kyrgyzstan’s capital, to Iran.

Since 2016, Iran has been importing meat from Kyrgyzstan, usually via Saha.

Saha Airlines operated one of the world’s last commercial flights of the Boeing 707, which was first manufactured in 1958 and helped usher in the jet age.

The four-engine, narrow-body aircraft was built until 1979.

Maintenance information regarding the Boeing 707 that crashed on Monday was not immediately available.

However, Iran has struggled obtaining parts for its ageing fleet of airlines, nearly all purchased during the time of the Shah Mohammad Reza Pahlavi and before the 1979 Islamic Revolution. – AP