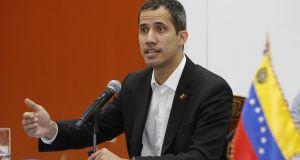 Venezuela’s opposition leader Juan Guaidó called for two days of protest over the carnival holiday while announcing his plan to return home despite the threat from authorities to detain him for illegally leaving the country.

Guaidó, who declared himself interim president in January and has since been recognised by more than 50 countries, announced the demonstrations for today and tomorrow as part of his campaign to remove president Nicólas Maduro from power amidst worsening political repression and the implosion of the oil-rich country’s economy.

In a post on social media, he also said he would be returning to the country after a week-long tour of South American neighbours where he was received as head of state but found no support for his call to have outside military intervention in Venezuela formally considered as an option for resolving the crisis.

He gave no details about how he would return or when. Guaidó claimed he crossed over into Colombia more than a week ago with the help of dissident elements in the Venezuelan military despite an order by the supreme court, which is controlled by Maduro’s populist chavista movement, not to leave the country.

Maduro and other leading figures in the regime have said Guaidó could be brought before the courts for disobeying the order without directly calling for his detention. The supreme court has also ordered the freezing of Guaidó’s assets.

In response to the threats, a United Nations independent human rights expert called for the authorities in Caracas to respect judicial independence. “I am concerned that pressure is being put on the judicial system to act against the political opposition,” Diego García-Sayán warned in a statement carried by the UN.

Caracas has also been warned by a number of foreign governments that any move to imprison Guaidó would mark a dangerous escalation of the political crisis gripping the South American country.

In a statement Federica Mogherini, the European Union’s high representative for foreign affairs, warned that “any measures that put at risk the liberty, security or personal safety of Juan Guaidó would represent a major escalation of tensions and would merit the firm condemnation of the international community”.

During his visit to Paraguay Guaidó said more than 600 Venezuelan soldiers have now deserted since clashes between his supporters and troops loyal to Maduro on February 23rd when the opposition tried to run humanitarian aid supplies into the country from Colombia, Brazil and the Caribbean.

Most of those who have deserted have crossed into Colombia and are drawn from junior ranks. The loyalties of Venezuela’s military are seen as key to deciding the current stand-off. Before the recent wave of desertions there had been a number of attempted insurrections by junior officers that were quickly snuffed out, indicating the high command remains loyal to Maduro, despite Guaidó claiming that 80 per cent of the army now supports regime change.

In response to the blocking of the aid convoys, the Trump administration on Friday announced a new round of sanctions targeting specific regime figures, following its imposition of measures targeting Venezuela’s oil sector in January as part of its support for Guaidó.

But Russia reiterated its support for the Maduro regime over the weekend. Speaking after meeting Venezuela’s vice-president Delcy Rodríguez, the president of the Russian senate Valentina Matvienko said her government would do “everything possible” to prevent US military action against Caracas.

The UN now estimates that 3.4 million Venezuelans have now fled the country as a result of the interlocking political and economic crises which have left many people to go hungry.