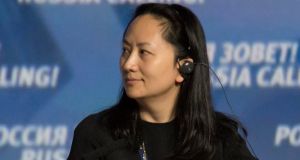 Canada has officially ordered the start of extradition hearings against Huawei chief financial officer Meng Wanzhou, in a proceeding that promises to be long and politically explosive.

Canada’s department of justice issued a formal “authority to proceed” after reviewing the US request that Ms Meng be handed over to face fraud charges, according to a statement on Friday. The US alleges she lied to banks to trick them into processing transactions for Huawei that potentially violated Iran trade sanctions.

The decision, while expected, fuels a diplomatic crisis with China, which has demanded Canada release Ms Meng, who was detained in December while on a stopover in Vancouver. It also clouds the prospects for two Canadians detained in China on national security grounds and a third fighting a death sentence for drug trafficking.

In a statement from Ottawa, the Chinese embassy said it was “utterly dissatisfied” with the decision. “This is not a merely judicial case, but a political persecution against a Chinese high-tech enterprise,” the embassy said. It demanded Ms Meng’s release.

Canada’s decision to proceed “in the face of the political nature of the US charges” was disappointing, Ms Meng’s defence lawyers, led by David Martin, said in an email, citing US president Donald Trump’s earlier comments saying he might intervene in the case.

They also said the US charges don’t constitute a crime in Canada. Ms Meng maintains her innocence and believes the US prosecution and extradition constitute “an abuse of the processes of law”, they said. “Our client looks forward to having her rights vindicated in the judicial phase of the extradition process.”

China’s ministry of foreign affairs said in a statement on its website that “the abuse of bilateral extradition treaties by the US and Canada that imposes compulsory measures” on Chinese citizens are “serious violations” of their legal rights.

China has called on Canadian prime minister Justin Trudeau to intervene. Mr Trudeau has said he can’t do that, though his justice minister will ultimately sign off on any extradition, after the next step, which is a hearing. “Canada is a country governed by the rule of law,” the justice department statement said. Canada’s former ambassador to China, John McCallum, has said he thinks Ms Meng has a strong case. Mr Trudeau demanded, and got, his resignation shortly after.

For Ms Meng, the daughter of Huawei’s billionaire founder Ren Zhengfei, the decision sets in motion a process that could drag on for months and possibly years. If history is any guide, the odds are high that she will be extradited in the end. Ms Meng’s case is next due in court on March 6th, when the date of her first extradition hearing will be set, according to the statement. – Bloomberg