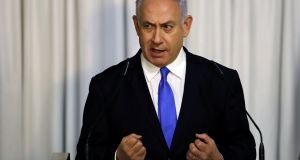 Israel’s attorney general has called for prime minister Binyamin Netanyahu to face charges in all three of the corruption investigations against him, pending a hearing.

The decision by Avichai Mandelblit comes less than six weeks before a general election. It is the first time that a serving Israeli prime minister has been told he faces criminal charges, and casts a question mark over Mr Netanyahu’s re-election campaign.

He is under no legal obligation to resign, even if indicted, but may find his political situation untenable if some potential coalition partners desert him. Most have indicated they will stick with him, at least until the hearing process runs its course.

In the most serious case, and the only one of the three alleging bribery, Mr Netanyahu is suspected of securing favourable coverage on a news website in return for regulatory benefits to its owner, telecommunications giant Bezeq. The bribery charge carries a maximum 10 -year jail term.

Mr Netanyahu has denied any wrongdoing, claiming he is the victim of a left-wing witch hunt, assisted by a hostile media and judicial officials, intended to topple him. On Thursday, he likened the investigations to a “house of cards that will soon come crashing down”.

“Rest assured, I will refute all the allegations,” he said in a televised address on Thursday night.

Mr Netanyahu will have an opportunity to make his case against the indictments at a pre-trial hearing, which will not take place until after the April 9th election, and may drag on until 2020 due to the complexities of the various graft affairs.

He has already said he has no intention of resigning and his Likuk party described the looming indictment as “political persecution”.

The actual filing of charges, which include fraud and breach of trust as well as bribery, will depend on the outcome of the pre-trial hearing. At that hearing Mr Netanyahu can try to convince Mr Mandelblit, the attorney general, not to indict him.

Mr Netanyahu (69) is seeking a fourth consecutive term and if successful at the polls would become Israel’s longest-serving prime minister.

He is suspected of wrongfully accepting $264,000-worth (€232,000) of gifts, which prosecutors said included cigars and champagne, from wealthy businessmen and dispensing favours in alleged attempts for benign coverage by a newspaper and a website.

In December, Israeli police recommended that the prime minister be indicted for bribery and fraud and breach of trust, with Mr Mandelblit left to make a final decision on whether to press charges.

Opinion polls have shown a tight election race, with significant gains for a centre-left alliance that could score an upset over the ruling Likud.

Anshel Pfeffer, author of a recent Netanyahu biography, said Israel is entering “uncharted waters” in which “no one has any idea how being a prime minister under notice of indictment will affect Netanyahu and his government”.

US president Donald Trump, asked at a news conference in Hanoi about Mr Netanyahu’s legal troubles, voiced support for the right-wing leader. Mr Trump and Mr Netanyahu have been as one on policy towards Iran and the Palestinians.

“Well, I just think he has been a great prime minister,” said Mr Trump, who held a summit in Vietnam with North Korean leader Kim Jong Un. – Additional reporting: Reuters