Woman struck by car in Seattle protest dies in hospital 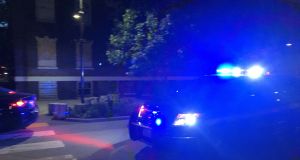 Dawit Kelete of Seattle drove the car around vehicles that were blocking I-5 and sped into the crowd about 1.40am, according to a police report released by the Washington State Patrol

A car drove onto a closed road in Seattle, Washington, and struck two people in a crowd protesting against police brutality, killing one and critically injuring the other, authorities said.

Taylor and Diaz Love, 32, of Portland, Oregon, were hit by the car that barrelled through a panicked crowd of protesters on Interstate 5 early on Saturday morning, officials said.

Dawit Kelete of Seattle drove the car around vehicles that were blocking I-5 and sped into the crowd about 1.40am, according to a police report released by the Washington State Patrol.

Video taken at the scene by protesters showed people shouting “Car! Car!” before fleeing the road.

Ms Love was filming the protest in a nearly two-hour-long Facebook livestream captioned “Black Femme March takes I-5” when the video ended abruptly; with about 15 seconds left, shouts of “Car!” can be heard as the camera starts to shake before screeching tyres and the sound of impact are heard.

A graphic video posted on social media showed the white Jaguar racing toward a group of protesters who are standing behind several parked cars, set up for protection.

The car swerves around the other vehicles and slams into the two protesters, sending them flying into the air.

The driver, who was alone, fled the scene after hitting the protesters, Trooper Chase Van Cleave said.

One of the other protesters got in a car and chased the driver for about a mile.

He was able to stop him by pulling his car in front of the Jaguar, Mr Van Cleave said.

Kelete was described by offices as reserved and sullen when he was arrested, according to court documents. He also asked if the pedestrians were OK, the documents say.

Kelete was booked into the King County Correctional Facility on two counts of vehicular assault. Bail was denied.

A judge found probable cause to hold Kelete on an investigation of vehicular assault.

He faces a second court hearing on Monday at which the judge will determine if he can be released on bail, according to court documents. It was not immediately clear if Kelete had an lawyer who could speak on his behalf.

Elsewhere, two people were killed and eight wounded in a shooting at a US nightclub, a sheriff’s official said.

Two Greenville County sheriff’s deputies noticed a disturbance at Lavish Lounge just before 2am, and saw a large crowd running out of the building, Sheriff Hobart Lewis said at a press conference in the US state of South Carolina.

There was “active gunfire from inside the building”, Lieutenant Jimmy Bolt said in an initial statement, and Mr Lewis said all the shots were fired inside.

Both Mr Lewis and Mr Bolt initially said 12 people had been wounded, with at least four in critical condition, Mr Lewis said, but Mr Bolt later told WYFF-TV that the casualty figure had been revised.

No one was immediately taken into custody.

The sheriff’s office had “some suspect information”, Mr Lewis said at the press conference, but was not sure if there were multiple assailants.

“We don’t really have a person of interest that we can name,” Mr Lewis said, later adding that authorities were not sure what led to the gunfire.

The names and precise conditions of the victims were not immediately released.

Mr Lewis said the victims were taken to the Prisma Health hospital in Greenville, some via private vehicle.

Prisma Health spokesperson Tammie Epps could not immediately comment when reached via telephone.

Mr Lewis said a “very large crowd” was at the nightclub for “some type of concert”.

The nightclub is about five miles southwest of central Greenville, in South Carolina.

Coronavirus cases in South Carolina have risen swiftly and the state’s rate of positive tests is three times the recommended level.

Mr McMaster reminded South Carolinians last week that he had not lifted restrictions on large crowds, and that those operating nightclubs illegally or holding concerts against his orders do not have to be caught in the act to face criminal charges, but instead could be charged weeks later if Covid-19 cases are traced back.

Mr Lewis said at the press conference that he did not know whether the club had sought an exemption to the governor’s order or secured a permit for Saturday night’s event, but said it was clear that the club’s patrons were not two metres apart.

“It’s certainly not the best situation to stop the spread of this virus,” the sheriff said. – AP